WATER AND A LAND’S IDENTITY

As I was requested to design a cultural event which could positively picture the territory, I thought it to be better to avoid the generic cultural events that crowd the Italian summers. Specifically, I mean the countless festivals, even if some of these have had, and still have, big merits in cultural promotion, e. g. the Literature Festival in Mantova, the Mind Festival in Sarzana or the Philosophy festival in Modena. Nevertheless, these events have rarely handled the peculiarities of the territory they were hosted in. Instead it was necessary to propose an event that would have celebrated some local features, aside from generically draw audience’s attention.

From this standpoint, it was likely to think about water, i. e. the Alto Reno identification element, due to the abundance of springs and streams and to the numerous facilities built in this domain over time (mills, foundries, etc.), to the artificial lakes and reservoirs, to the snow activities, and to the thermal baths that made Porretta into a famous location already in ancient times, worth to be mentioned by writers (Machiavelli) and scientists (Marconi). Therefore water is the main identity element in our territory, and has always been the most valuable source of life and sustenance for this valley. To create an event related to water merged as a must-be, in form of an extraordinary itinerary through the existence of the dwellers of these places.

At the same time, water has the capacity to leak out the boundaries. Water is the good that allows us to speak about the world and the apprehension for a resource increasingly difficult to source, to preserve and to equally distribute.

We are aware of the numerous issues related to water, of the millions treading every day nearly impossible ways to fetch few drops of this wealth.

We are aware that water addresses human rights and democracy, because the access to this resource pinpoints a population’s possibility to live and look forward.

We are aware that these fundamental issues also address the global assets; not accidentally the major powers’ strategics aims to this resource, already equated to petroleum due to its socio-economic value.

Issues also relate to the inadequacy of our national water piping system, due to technical problems as well as to access and purpose of water springs, i. e. discourses about water as a common good, which eventually led to a referendum in 2011, raising the social and environmental issue in our country. While adequate consideration for this topic is still lacking, it is crucial to face it, as many think water to be an inexhaustible, even taken-for-granted resource. The subject will be discussed in nearby schools; the involvement of young generations is essential, to warn them, make them aware and project them into the future.

The International Water Festival – a binding heading – gives expression to the willingness to set up a wide ranging and ongoing event. Its subheading being ‘Water Wonders : Environment, Economics, History, Arts and Entertainment’, it does not simply address technical-scientific aspects, but invites us to manifold considerations about the vitality of water and its eternal quality. It leads us to deep remarks, to myriads of colors, to thousands evocative words, to stories and memories, to the many economic and social activities regarding water in which local and international communities have engaged. Hence we need to widen the scenario and to imagine the water topic as a global, universal notion, with many references and visions.

We are led to contemplate a humble, mere – and grand at the same time – feeling, tuned with the Alto Reno valley, a place of endless beauty with its woods and valleys, heights and peaks, water streams and wildlife, art and leisure facilities: a combination that leads us to a sense of joy, a juvenile candor, a youthful stunning, a slow and patient time flowing. The event is meant to conjugate the local community and the numerous tourists through the concept of water: the scientific seriousness and the artistic creativity, the moral consciousness and the historical awareness, the environmental implication and contemplation of future, and so on. The festival has the ambition to be a flywheel to attract many people to this highly environment vocational area: just keep in mind, for example, that the former Comune di Granaglione hosts the largest wooded area in the Emilia Romagna region.

As philosopher Bachelard said, it is necessary to place everything in a wide and serious phenomenology, where imagination can turn water into dream, artistic creation, life, deep magic collective unconscious. To achieve this, we have put together historians and literates, scientists and technicians, poets and musicians, artists and cooks, politicians and economists, legislators and actors, journalists and anthropologists. Each of them is going to contribute to create a virtuous and valuable, scientific and narrative space. A fundamental narrative to human life and fantasy.

A special feeling urges us to remember Giuseppe Ungaretti, his exodus in distant lands, his desperate quest for an inner contentment, by means of his rivers, the water streams that constantly lick his life like a mysterious flow, and become the beat of a torn heart. That heartbeat is also our breath, the secret endless flow of the Reno river that so long spelled the time of the whole community, and – as novelist Paolo Volponi said – leads to think that it is possible to see the world only starting from one’s small homeland. 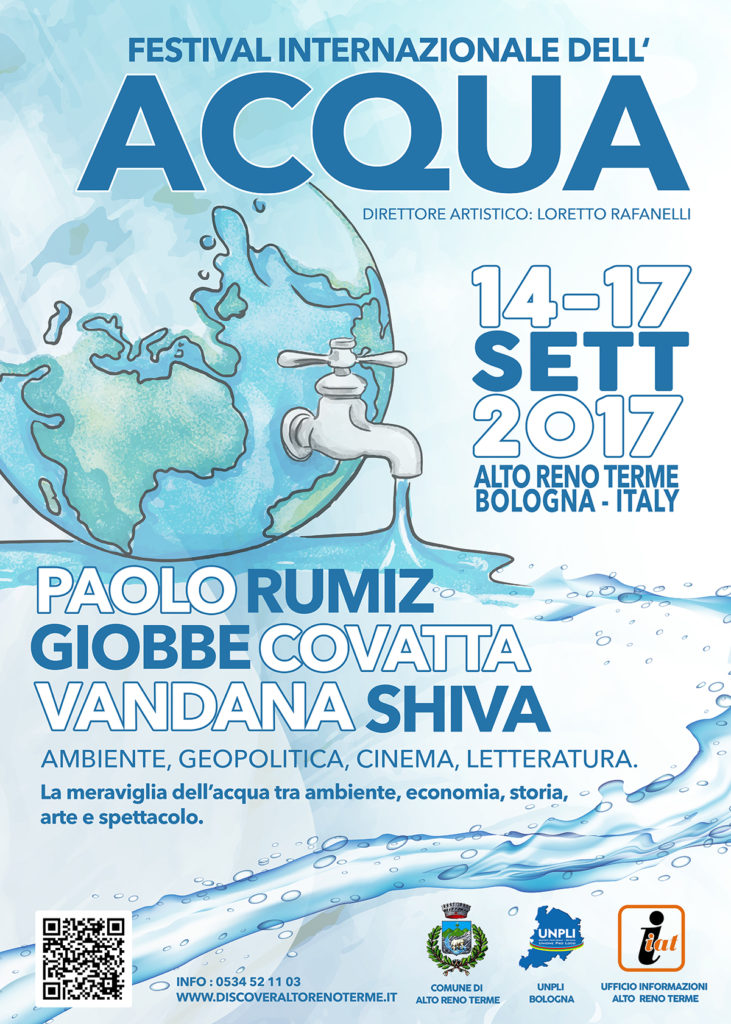 For its 3rd edition, the goal is to organize a festival increasingly characterized as the largest national environmental event, a festival able to focus a substantial share of the environmental – even international – sector, by hosting valuable guests and by ‘sticking’ to the ONU Water Mondial Forum days, held every three years since 1997 and organized by the World Water Council, knowing that this space is not busy with other events.

An appointment that the local and regional institution are doubtlessly able to set up.

As in the past, our commitment is to allow sector’s associations and units to participate at the event, besides local and regional institutions, as well as to UNESCO – which patronized the 2nd edition of the festival.

We believe Vandana Shiva’s participation to ensure particular significance and visibility, like Rumiz’s (with his ‘incursions’ in Italian rivers), Margherita Ciervo’s (author of Geopolitica dell’acqua), Paolo Sorcinelli’s (author of Storia sociale dell’acqua), Pietro Laureano’s (with his research on deserts) and other experts’ and technicians’, engaged in debates on various themes: Water sanitation, Water condition in Italy, What do we drink? Tap water, Is mineral water reliable?, Water and agriculture. Some of these experts will visit nearby secondary and high schools (Porretta, Castel di Casio, Lizzano, Gaggio, Vergato, Sasso Marconi, Casalecchio, Bologna, Pistoia) to converse with hundreds of students, carrying on the commitment to inform and educate children and youngsters about environmental issues.

A play will be performed – Ghiaccio bollente (The Boiling Ice) – in the presence of two well-known exponents of Italian art and science: Giobbe Covatta and Mario Tozzi. Room will be given to movies and documentaries about water resources, with a selection of some of the best international works on topic and a national prize for water documentaries.

Vandana Shiva’s presence allows to pull in various attendances and to focus on various themes we would like to submit to experts’ opinion, as well to operators and citizens, to further meditate on world water emergency, along with all its social and political implications in the international community; it is eventually about democracy, like Vandana Shiva itself keeps on telling.

Necessarily directed and organized by Emilia Romagna region, a further topic – possibly also for a national convention – is the water waste in our country, through a confrontation among various Italian regions exponents: An important exam of the actual condition, potentially an occasion to elaborate adequate normative solutions, also by comparing the standpoints of groups and associations which supported water as a common good. The convocation of a national conference about water is obviously only possible thought the commitment, coordination and direction of Emilian Environment Assessor Dr. Paola Gazzolo. We believe that this enterprise could situate Emilia Romagna in a key position towards the forefront debate concerning environmental issues.

Finally, we would like to highlight the commitment of Alto Reno Terme Municipality in the area of practical resolution of issues concerning the lack of water in the African continent, by means of the setting up of a well in a small town in Burundi, by supporting the engagement of an association, active for years in that country, making water resources available to thousands. 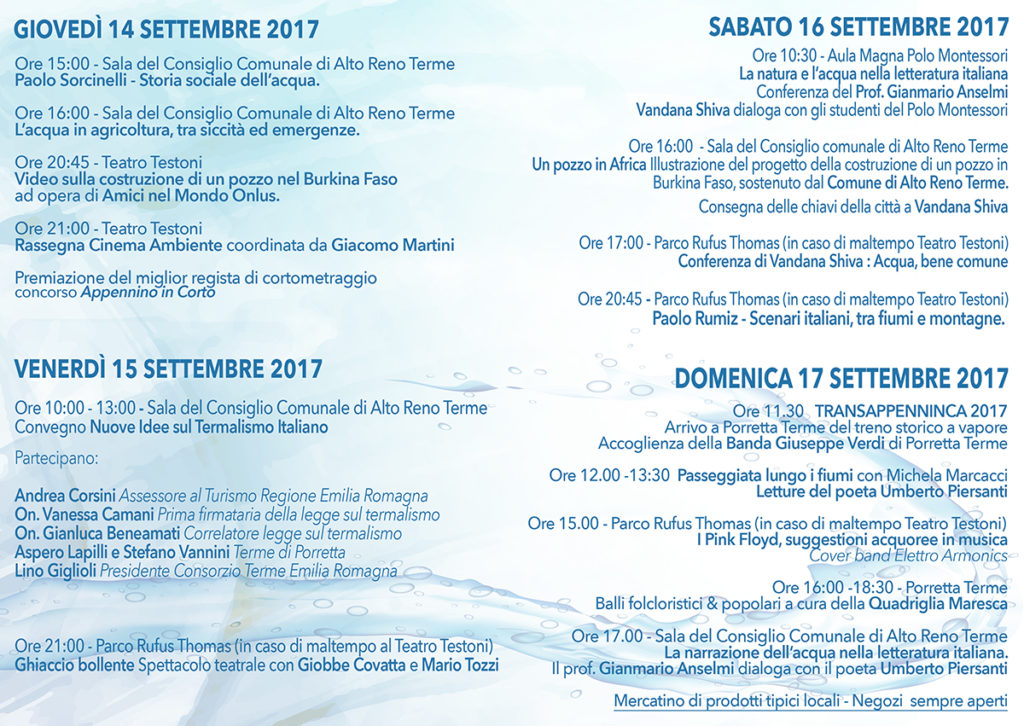