A SPECIAL EDITION OF THE PORRETTA SOUL FESTIVAL, KIND OF “ONE NIGHT IN MEMPHIS” WITH THE UNMISSABLE STYLE THAT MADE THE FESTIVAL UNIQUE.

Since 1988 the Porretta Soul Festival, Tribute To Otis Redding has become the most prestigious European event entirely dedicated to soul and rhythm & blues music, with a particular reference to the music of Memphis, the Memphis Sound, the musical school of the great Otis Redding, to which the festival is dedicated.

It will be a special edition, winter-style, and will see the exceptional participation of Bobby Rush, Grammy Awards winner 2021, whose showmanship was featured in Richard Pearce’s documentary film “The Road To Memphis”, part of Martin’s film series. Scorsese “The Blues”. Porretta celebrates it with a gigantic mural 13 meters high.

Curtis Salgado, mentor of John Belushi and Mitch Woods & His Rocket 88’s (boogie-woogie piano), will also be in Porretta for the New Year’s concert.

The main concerts will be held at the Kursaal Cinema Theater but Porretta will be a sort of little Memphis with musical performances in hotels and clubs. A Christmas village will host a market exhibition of typical local products. The presentation of the new book by Antonio Bacciocchi “Soul” Ed. Diarkos (Rusconi-Mondadori) and the screening of the film by Giorgio Verdelli and Graziano Uliani “The Roads of the Soul” are scheduled.

In collaboration with Bologna Welcome, guided tours of the murals of the greats of soul will also be organized with tasting of local products.

Allan Harris became a star after winning the Downbeat critics’ referendum in the “Rising star jazz vocalist” category. In America this title is the official consecration of a star: In Italy he is known for his numerous participations in Umbria Jazz. Singer and guitarist, this Brooklyn artist recalls the world of crooners. His latest project “Kate’s Soulfood” is inspired by his aunt Kate and her famous restaurant Kate’s Home Cooking. Located just behind the Apollo Theater in New York, the diner was often frequented by musicians (and most notably appears on the cover of Jimmy Smith’s Home Cookin ‘). Harris spent his Sunday afternoons at his aunt’s restaurant, soaking up the sounds and sights, before attending a show at the Apollo. “I have lived through many pivotal moments at my aunts’ restaurant. I attended parts of the civil rights movement, I met with exceptional people and it was there that I really found my voice ”. In composing the music featured in Kate’s Soulfood, Harris drew on these impactful experiences and, in doing so, produced a vast sonic tapestry of his beloved neighborhood.

Kate’s Soulfood is an immersion in soul for Allan Harris, described by the Miami Herald as possessing a voice with “the warmth of Tony Bennett, the bite and rhythmic sense of Sinatra and the sly elegance of Nat ‘King’ Cole”.

The idea for the band was born to Anthony Paule at the Porretta Soul Festival 2015 and is made up of the best session men in the Bay Area. . The album “Soul For Your Blues” received two BMA (Blues Music Awards) nominations and “After A While” made with Wee Willie Walker 5 nominations in 2018.

Wee Willie Walker & The Anthony Paule Soul Orchestra’s posthumous album “Not In my Lifetime” was recently released at the top of the American specialized charts. The band is stratospheric, a pool of exceptional musicians. Just think that Anthony has worked and recorded with Boz Scaggs, Charlie Musselwhite, Johnny Adams, Maria Muldaur, The Johnny Nocturne Band, Norton Buffalo, John Nemeth. Kevin Hayes, new drummer, worked with Robert Cray for 20 years and recorded with B.B. King, John Lee Hooker and Van Morrison Bill Ortiz, trumpet, was part of Santana’s band and Charles McNeal is the Bay Area’s most in-demand session man. It is also the house band of the Porretta Soul Festival for the sixth year.

Curtis Salgado grew up in Eugene, Oregon forming his band The Nighthawks and then co-leading the Robert Cray Band.

In 1977 the meeting with John Belushi. While John Landis was filming Animal House, Salgado and Belushi spent hours playing old tunes, with Belushi absorbing the music like a sponge using this new knowledge to create The Blues Brothers. The first album of the Blues Brothers “Brifcase of Blues” is dedicated to Salgado.

He released his first solo album in 1991, then moved on to Alligator Records. Salgado scooped up Blues Music Awards in all categories including the coveted B.B. King Entertainer Of The Year.

He has overcome several challenges, battling liver cancer in 2006 and lung cancer in 2008 and 2012. In March 2017, he underwent quadruple bypass surgery.

He arrived in Porretta in 2019 with Soul Shot.

He will stay in Porretta for the New Year’s concert at the Helvetia Hotel.

Born on November 10, 1933 in Homer, Louisiana, he is a unique and essential artist for the history of American and international music. He is still today the most acclaimed witness of the “Chitlin’Circuit”, the circuit of clubs frequented by people of color. He celebrated in the series “The Blues” produced by Martin Scorsese. Winner of two Grammys, one of which in 2021. Listed among the great artists of the Blues Hall of Fame. He most recently played himself in Craig Brewer’s “Dolemite Is My Name,” which marks the return of Eddie Murphy.

He will be a guest of the Anthony Paule Soul Orchestra with the inseparable danseuse Mizz Lowe.

Mitch Woods has been carrying on the great American musical legacy for three decades, taking inspiration from the great jump n ‘boogie outfits of the late 1940s and early 1950s, giving new life to the music that generated rock n’ roll. Woods was inspired by the jumpin’n’jivin ‘, shoutin’n’honkin’, pumpin’n’poundin ‘bands of Louis Jordan, Wynonie Harris, Joe and Jimmy Liggins, Amos Milburn and Roy Milton. Add to all this a healthy dose of New Orleans rhythm and blues. Shall we call it “rock-a-boogie”?

He will stay in Porretta for the New Year’s concert at the Helvetia Hotel.

The Living Blues Magazine consecrated his album “My Blue Soul” in the 50 Best Albums of 2016. She was nominated by the Blues Foundation as Best Female Blues Artist 2020. Already present in Porretta in past Editions, she will be a guest of the Anthony Paule Soul Orchestra.

“Terrie Odabi is today the most representative and most dynamic artist to emerge in the Bay Area since Etta James left the Fillmore District of San Francisco in the 1950s. Terrie has a powerful stage presence, writes fantastic melodies, directs an all-star band and has movements on stage that perfectly match the rhythms of her material. Celebrity is certainly waiting for her. “ 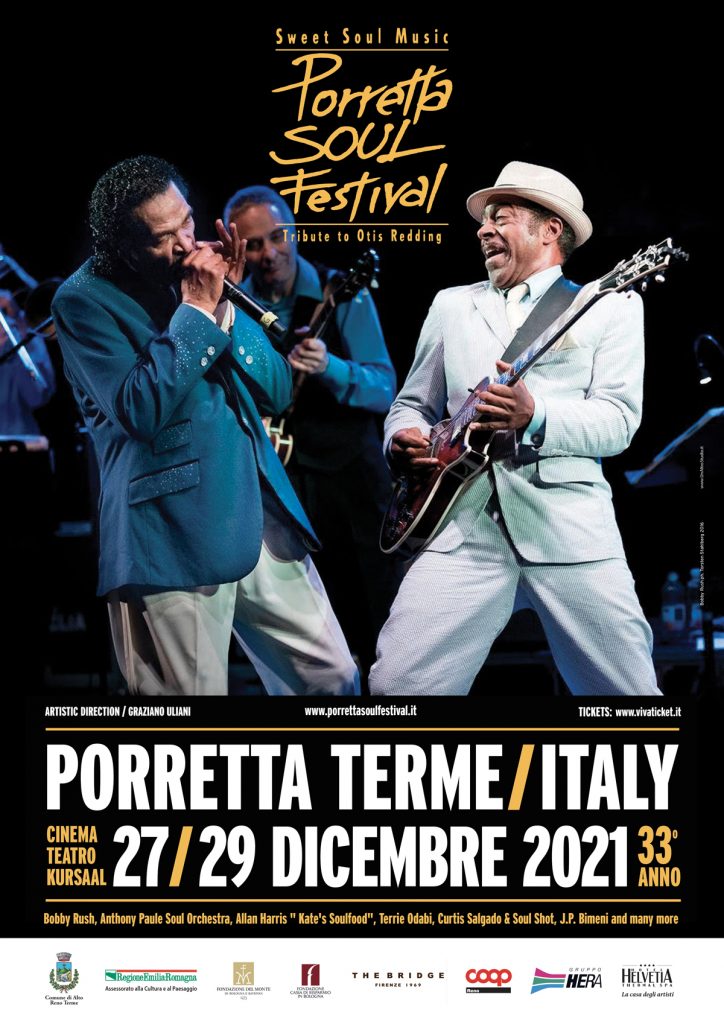