Previews, concerts, exhibitions, awards. In the name of Otis Redding, the 34th edition of the Porretta Soul Festival returns, from 21 to 24 July in the spa town of the Bolognese Apennines.

Between well-known faces and first appearances, there will be over 200 artists who will alternate in concerts at the Rufus Thomas Park in the town of Porretta Terme, on the Apennines between Bologna and Florence, in the squares and neighboring towns, in the extension of the festival to the Valley of Soul.

The recent broadcast on RAI5 of the award-winning film dedicated to the festival “A Soul Journey”, currently available on RaiPlay, has given further visibility to the event.

In addition, there will be the presence of the house band from San Francisco, the Anthony Paule Soul Orchestra which this year has four nominations at the Blues Awards. Among the ten elements is the presence of Larry Batiste, former musical director of the Grammy Awards.

On July 20, preview of the festival, dedicated to “Alan Lomax in the Apennines between Emilia and Tuscany twenty years after his death” with the presence of producer Scott Billington.

The great American ethnomusicologist stopped at the festival sites in the winter of 1954, collecting and cataloging popular songs published by Scott Billington’s Rounder Records. At the end, a concert by Johnette & Scott with the music of Alan Lomax.

From July 21st to 24th, the festival dedicated to classic soul and rhythm & blues, will host in European exclusive, authentic legends such as John Ellison, former leader of the Soul Brothers Six. In 1967, his Atlantic Records hit “Some Kind Of Wonderful” topped the charts. 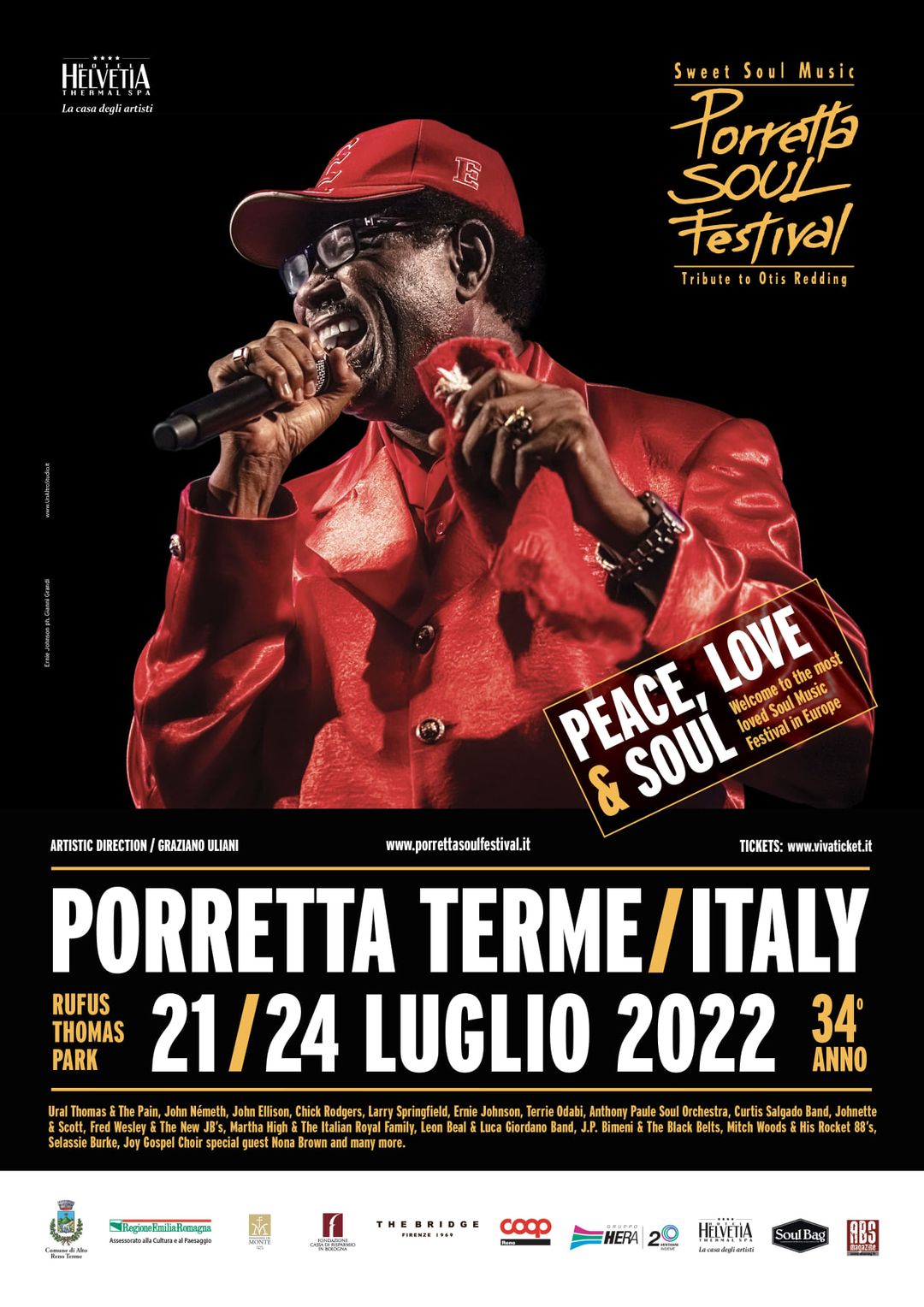 First time in Italy for Uran Thomas & The Pain, John Nemeth, multi Blues Awards winner. Chick Rodgers, Larry Springfield and Ernie Johnson confirm Porretta’s love for “old school” and Memphis Sound. Among the women there will be Terrie Odabi who has just been nominated as “Female Soul Blues Artist 2022” at the Blues Awards, Mitch Woods & His Rocket 88’s boogie champion. Luca Giordano returns this time with the talented Leon Beal. Selassie Burke (one of Solomon’s 21 children) will return to Porretta to pay tribute to their father.

By great demand, present in the latest edition, the explosive Curtis Salgado mentor of John Belushi and inspirer of the Blues Brothers accompanied by his Soul Shot and Burundi J.P. Bimeni & The Black Belts, the artist who best interprets the spirit of Otis Redding.

The first evening will be dedicated to James Brown, a tribute to the godfather of soul, with his former band leader Fred Wesley & The New JB’s and Martha High & The Italian Royal Family, James’s personal vocalist for 35 years.

The evocative atmosphere of Porretta Terme will be the setting for the event together with the Street Food Village, street food with focus on typical products of the Bolognese Apennines. All in the context of free concerts by rhythm & blues bands starting at 11 am on the “Rufus Thomas Cafe Stage” in the central Piazza della Libertà.

Furthermore, on 25 and 26 July, in the surroundings of Porretta, there will be The Valley of Soul, an initiative that will see collateral concerts with many protagonists of the festival.

Porretta Terme is also worth a visit for the series of 13 murals that tell the story of the festival and soul music. A curiosity: the town in addition to the park dedicated to Rufus Thomas, has Otis Redding Street, Sam Cooke alley and Solomon Burke Bridge.