The appointment with Vox Vitae is approaching.

A full day dedicated to baroque music destined to leave its mark in our territory’s music tradition. Despite the time flow, this kind of music keeps on achieving resounding successes and shaking every listener’s imagination.

The baroque genre has gained new impulses thanks to the commitment of the youth music association as it engages with local music instances.

Sunday 26th August 2018 in Alto Reno everybody can enjoy such rare pearls. 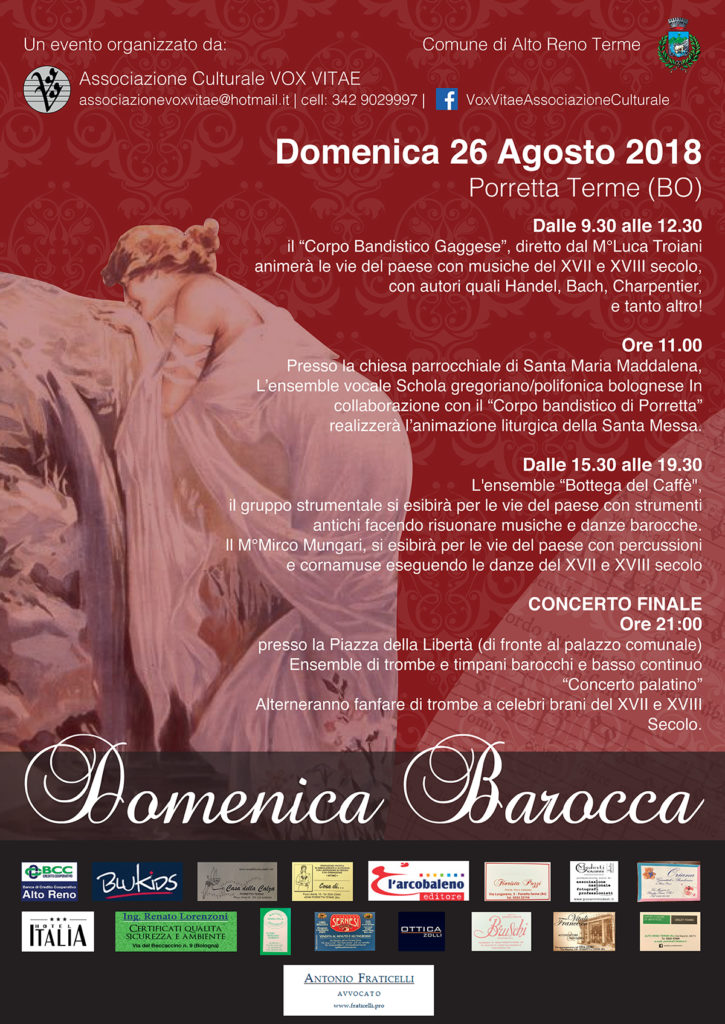 The program starts with Handel’s, Bach’s, Charpentier’s music, performed by the Corpo Bandistico Gaggese, conducted by Maestro Luca Bflat Troiani around the streets of Porretta Terme from 9:30 am to 12:30 pm.

At 11:00 am the church of Santa Maria Maddalena hosts the vocal ensemble Schola gregoriano/polifonica bolognese to play the mass, with the cooperation of Porretta Terme’s Corpo Bandistico “G.Verdi” and the participation of Giovanni Monari and Leonardo Vivarelli (trombone). Music from the Cattedrale of Bologna’s archives and Gregorian chants will be perfomed.

From 3:30 pm to 7:30 pm the old instruments of the ensemble Bottega del Caffè and of Maestro Mirco Mungari will swarm the streets of Porretta Terme.

At 9 pm in Piazza della Libertà takes place the closing concert. The ensemble “Concerto Palatino”, conducted by Maestro Michele Santi will perform with the brass band, timpani and continuo.

See you this summer, Aug 26th, in Alto Reno Terme!