As the audience welcomed the last editions, the Porretta Cinema Festival – FCP for short – will be extended for one extra day, with more screenings, events and a greater involvement of nearby schools and cinema halls. The festival starts on Saturday 7 and lasts two week-ends – instead of just one, as it has been so far. Promoted events will not be circumscribed to the Festival week and will take place throughout the year.

The Association means to create a network with agents of local culture and tourism development. In the last few years, several partnerships with important local producers – like Acqua Cerelia – and hotels – like Hotel Helvetia – were built ; during 2019, the Association’s goal has consisted in incrementing such cooperation in order to promote the art week as a means for local growth and development. 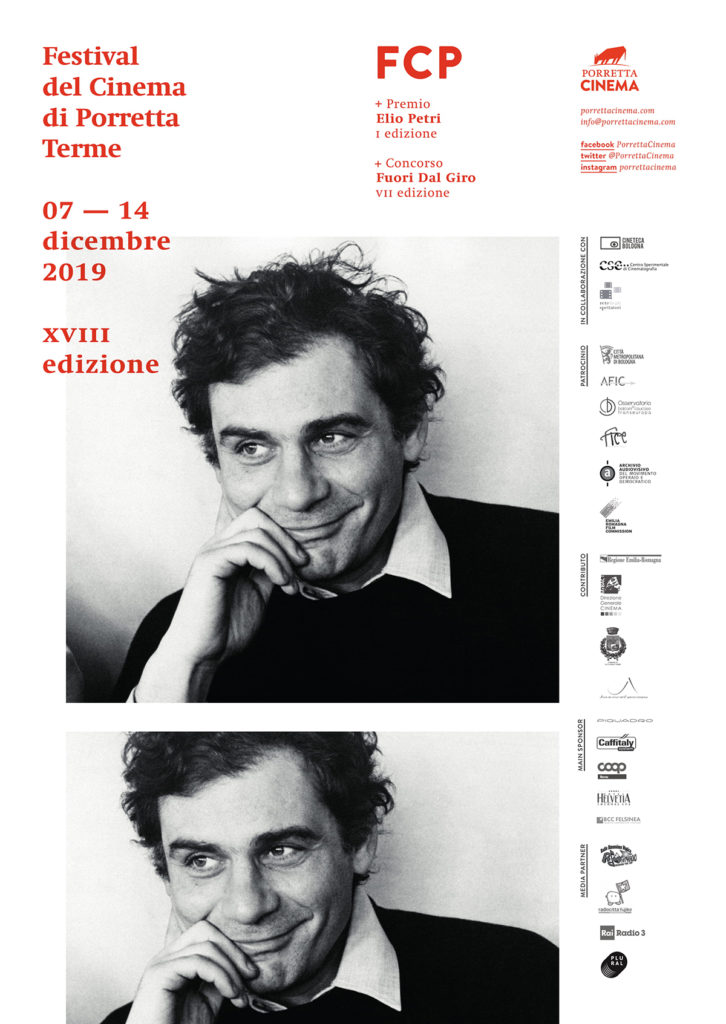 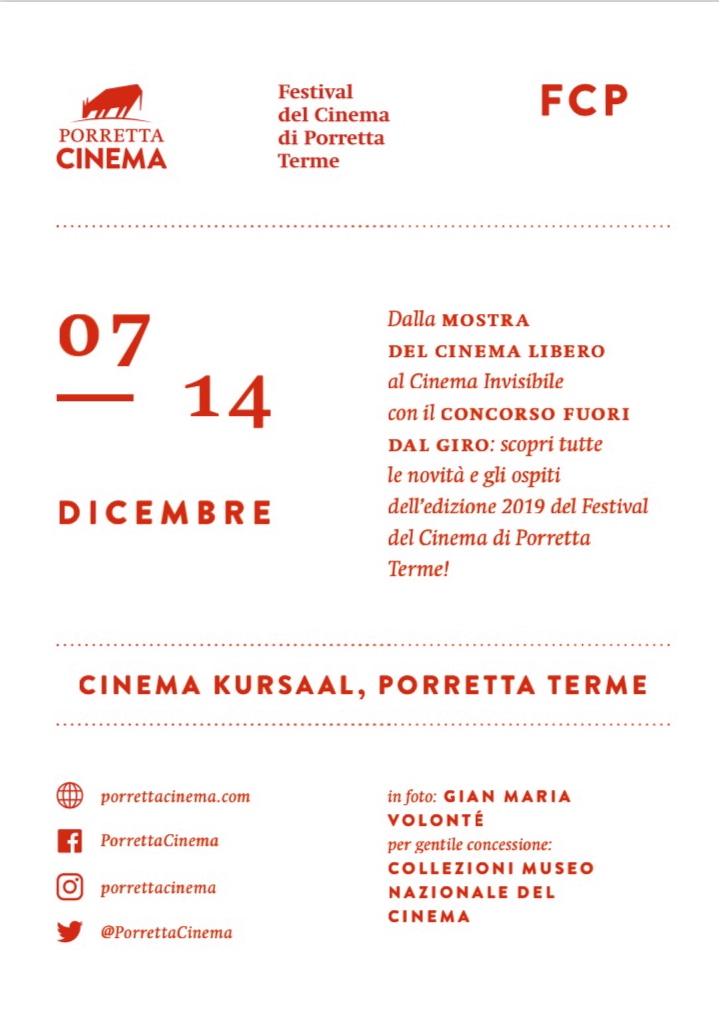 A famous international director will be the main character of FCP’s XVIII Edition,
picked among important names – including Lars Von Trier, Spike Lee, Guillaime Canet. As usual, the director will participate in two chosen days during the Festival and will meet the audience and the students of local schools.

During the FCP XVIII Edition will be awarded the sixth prize for the contest named “Fuori dal Giro” (meaning “off circuit”). National quality films will be selected with help of the Audience Network, with a focus on Emilia-Romagna movies. In the cinema hall, the audience will choose and award the winner in real time. The awarded movie will be screened in agreed cinemas.

The Prize “Giuria dei ragazzi” (“young jury”) will see its fourth edition. Schools students will confer a special mention to a film or an actor/actress of the contest “Fuori dal giro”.

In occasion of the 2019 edition, the new senior jury has been created, formed by over 65 audience. After the young jury, another point of view on Italian and international cinema.

The Festival role on the territory is increasing. In this respect, events and screenings in nearby cinemas will be promoted (Vergato, Sasso Marconi, Lagaro – Castiglione dei Pepoli) also during the Festival week. From years, the Association is engaged to involve the young people, to elicit their passion for the art week, therefore will improve the bond with local schools. During the Festival week, in school Istituto M. Montessori – L. da Vinci in Porretta and in schools in Vergato and Sasso Marconi will be screened a movie.

Strengthened by the success of international cinema in recent years, such as the Italian premiere of the Austrian comedian Josef Hader’s debut, “Wilde Maus”, the section “Sguardi altrove: Il cinema mai visto” goes on. A national preview of one or more European films not distributed in Italy will be screened, trying to favour the least known to the general audience. For this edition, the host country will be Romania. Thanks to the cooperation with the Romanian embassy and the cultural institute, wide space will be given to cinematography.

MEETINGS: A JOB IN CINEMA

The partnership with the National Film Archive – Experimental Cinematography Center will be strengthened during the XVIII edition of the Festival, enabling meetings with former students of the school, today professionals in the world of cinema. With the section A job in cinema, meetings will be organized with film professionals who will meet high school students

Also for this edition ample space will be given to the cinema for the little ones. In collaboration with Cineteca di Bologna, various screenings will be organized for children aged 6 to 13.

The historic collaboration with the Cineteca di Bologna will allow the screening a restored masterpiece that have marked the history of cinema, with particular attention to authors of the Free Cinema Exhibition.

In the 2019 edition of the Cinema Festival is pursued the project of a competitive section of short films: Corto in Loco. The short films will be presented at the Galleria Gomma Bicromata, an exhibition space for young artists.

In the 2019 edition, the first edition of the Elio Petri National Award will be held. This artist has been at Porretta many times guest of the International Free Cinema Show, presenting in 1971 “La classe operaia va in paradiso” as a world premiere.
A national award dedicated to films produced during the year. The jury chaired by Walter Veltroni will be composed of Steve della Casa, David Grieco, Giuliano Montaldo, Paola Pegoraro Petri. 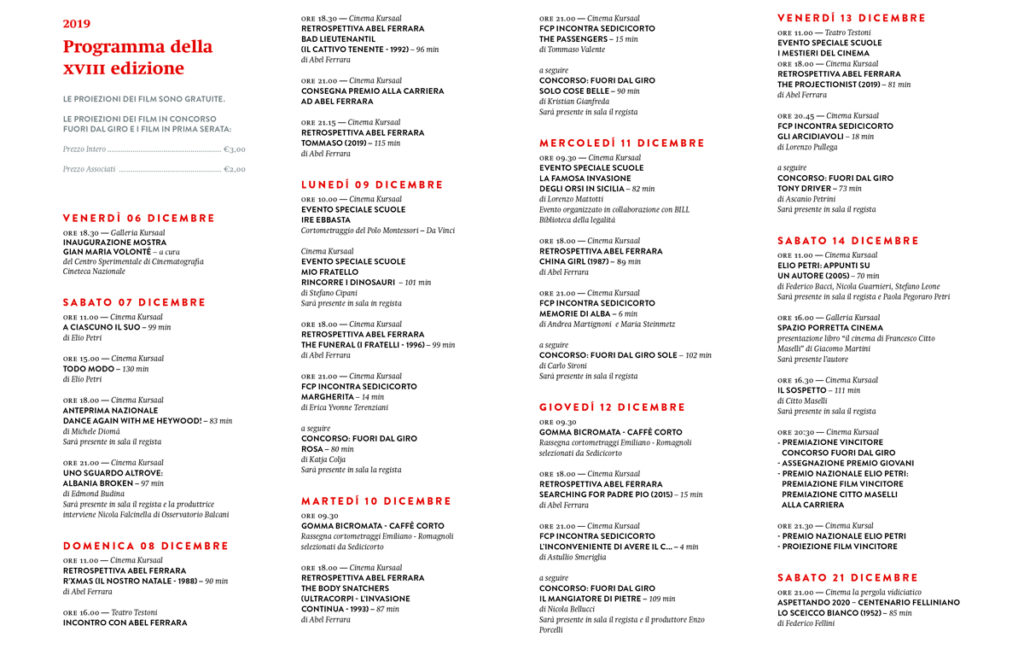