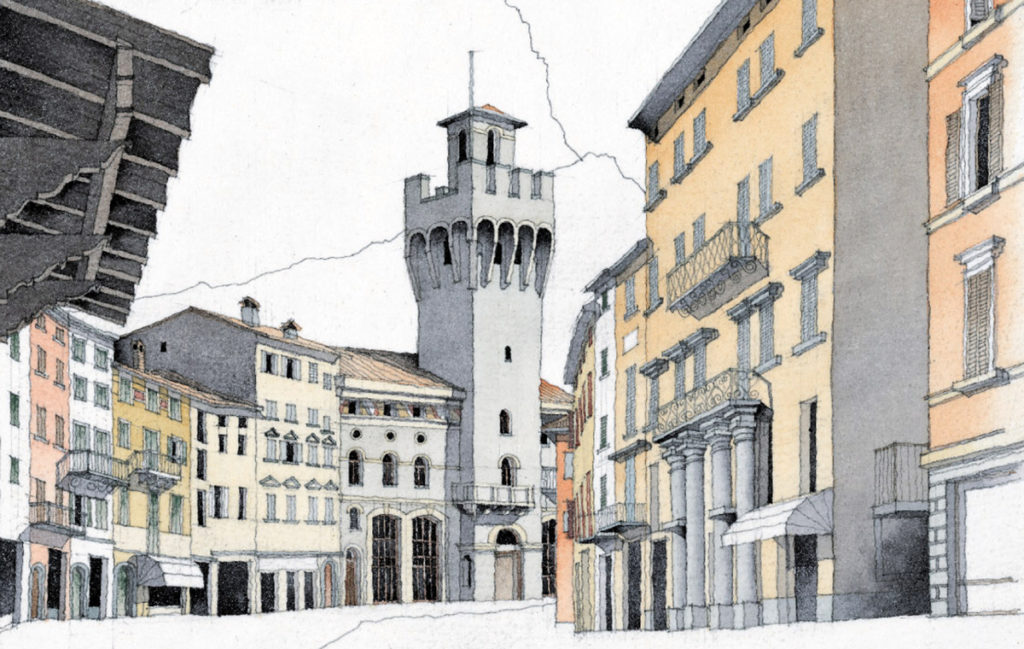 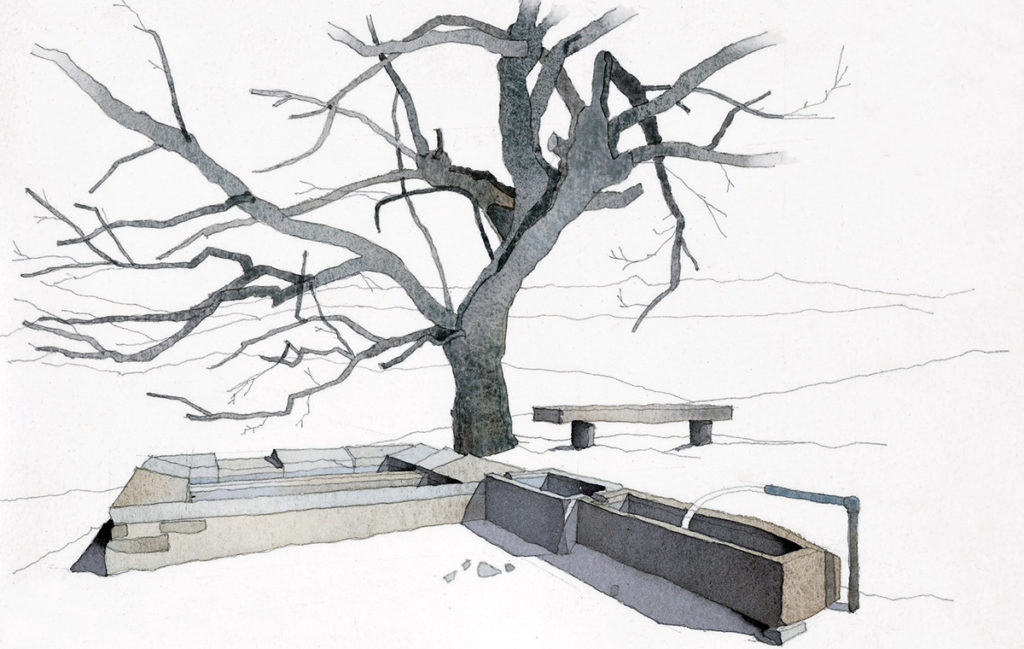 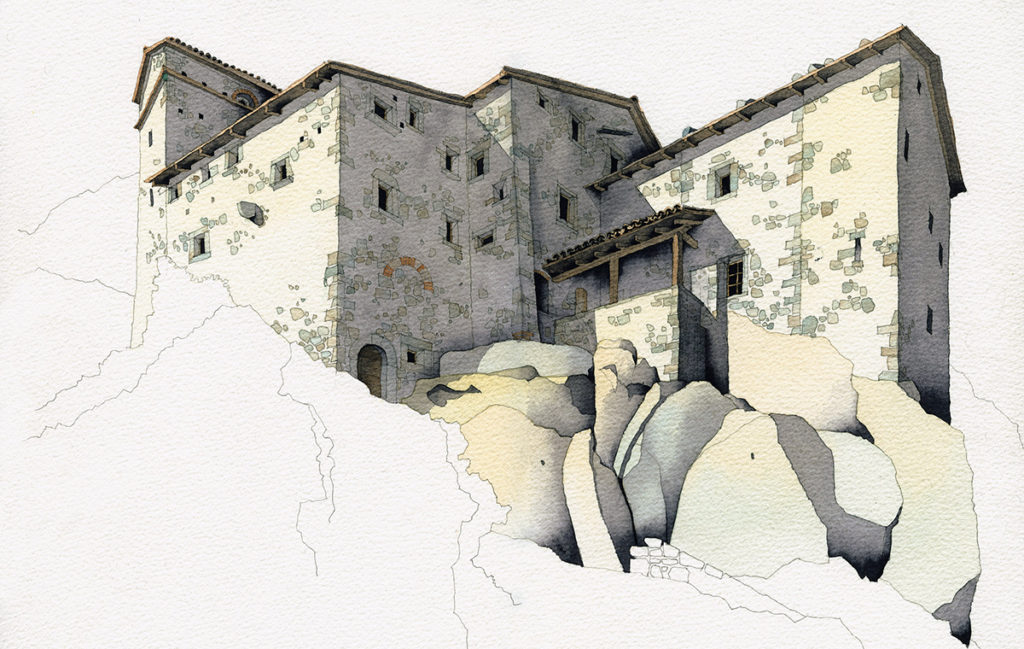 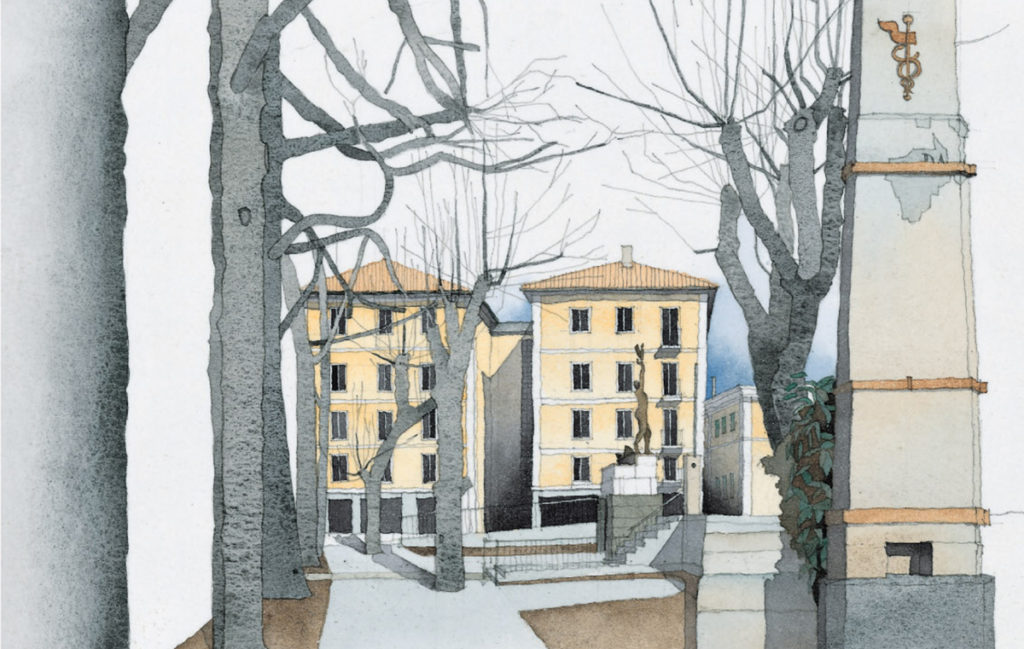 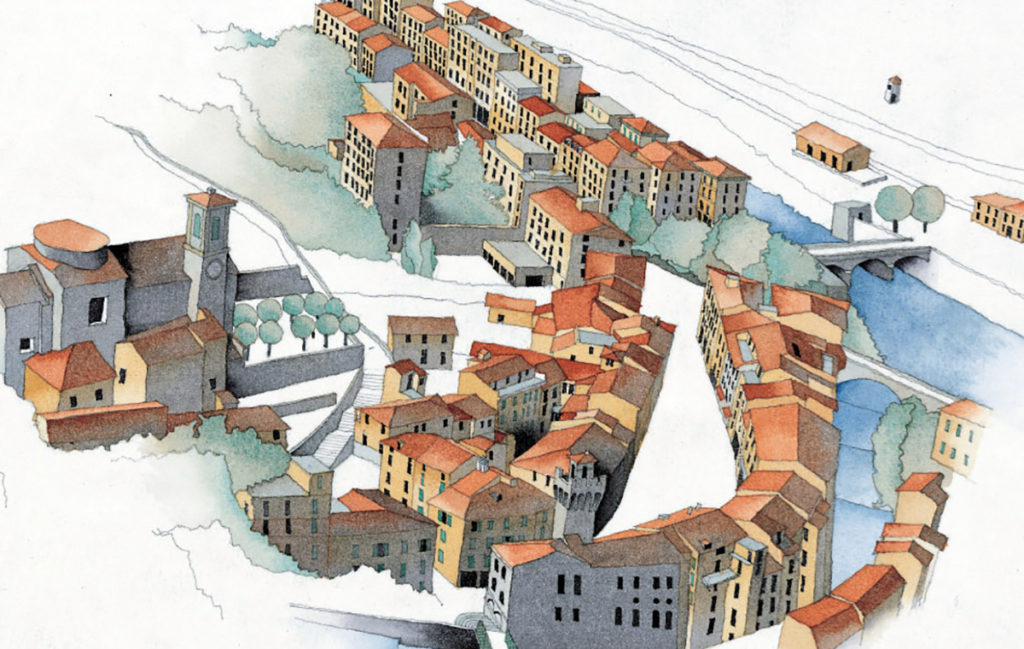 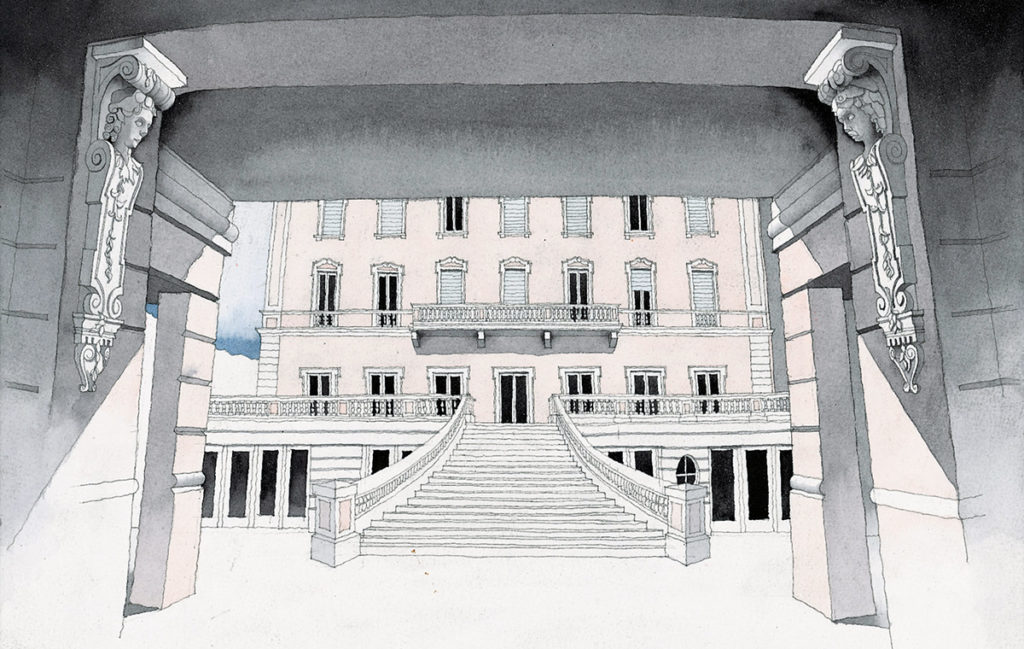 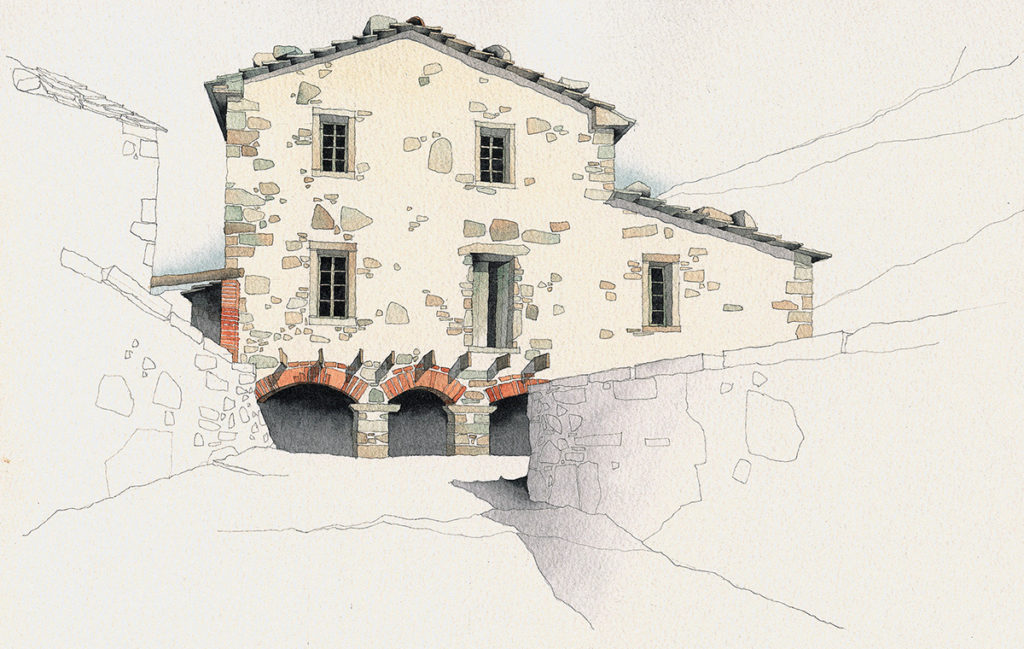 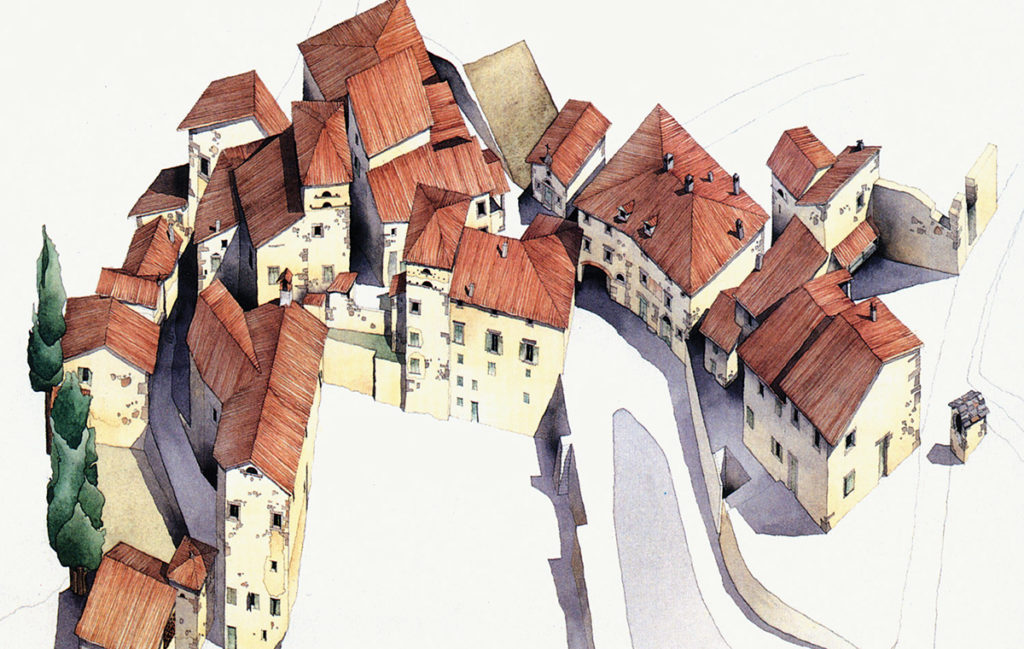 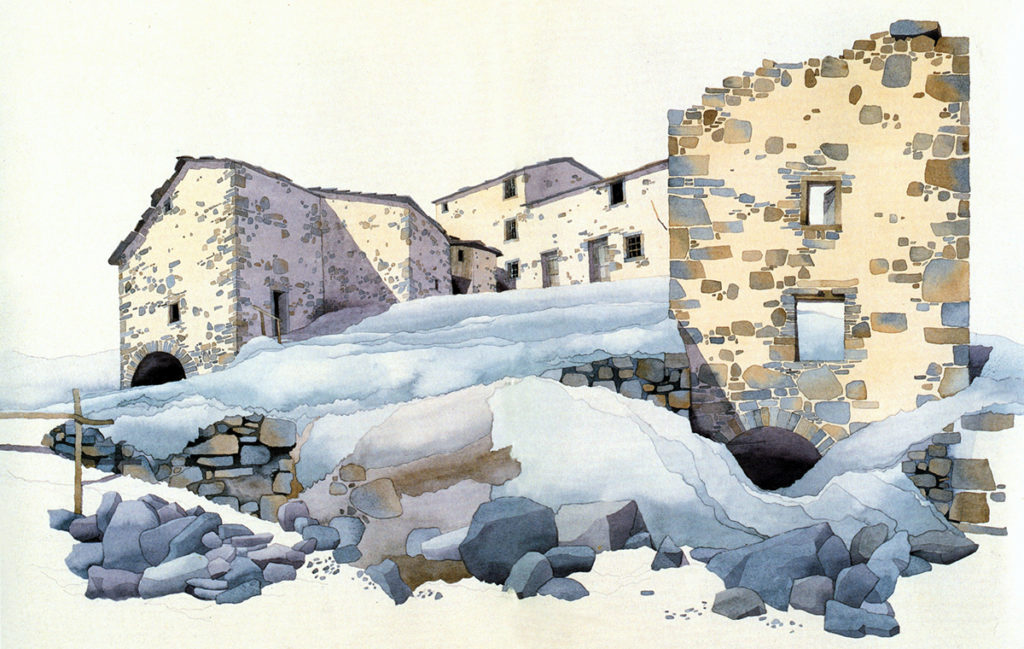 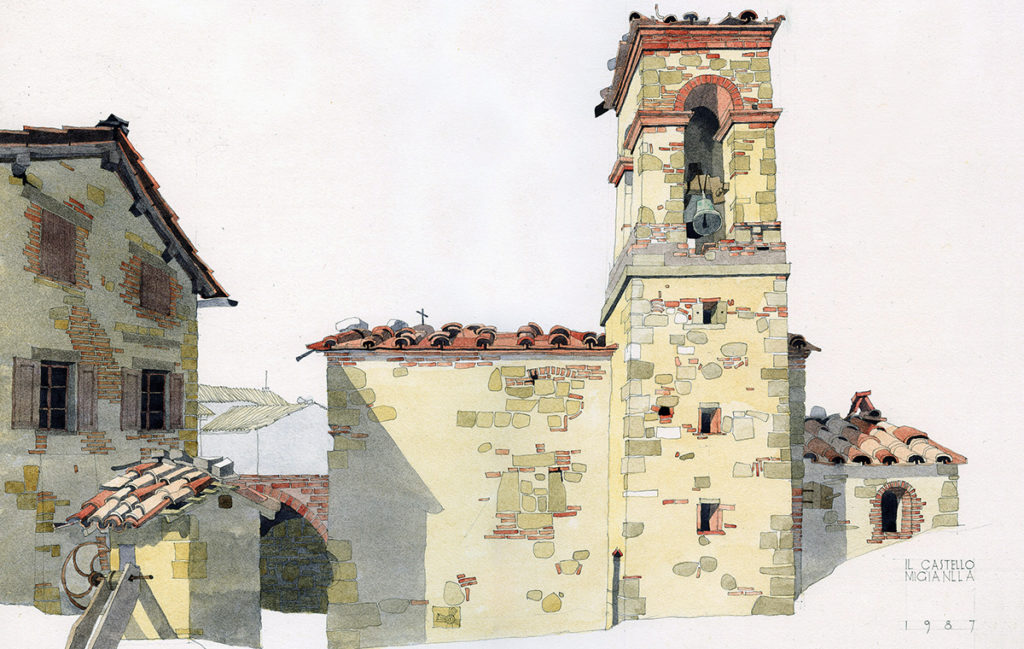 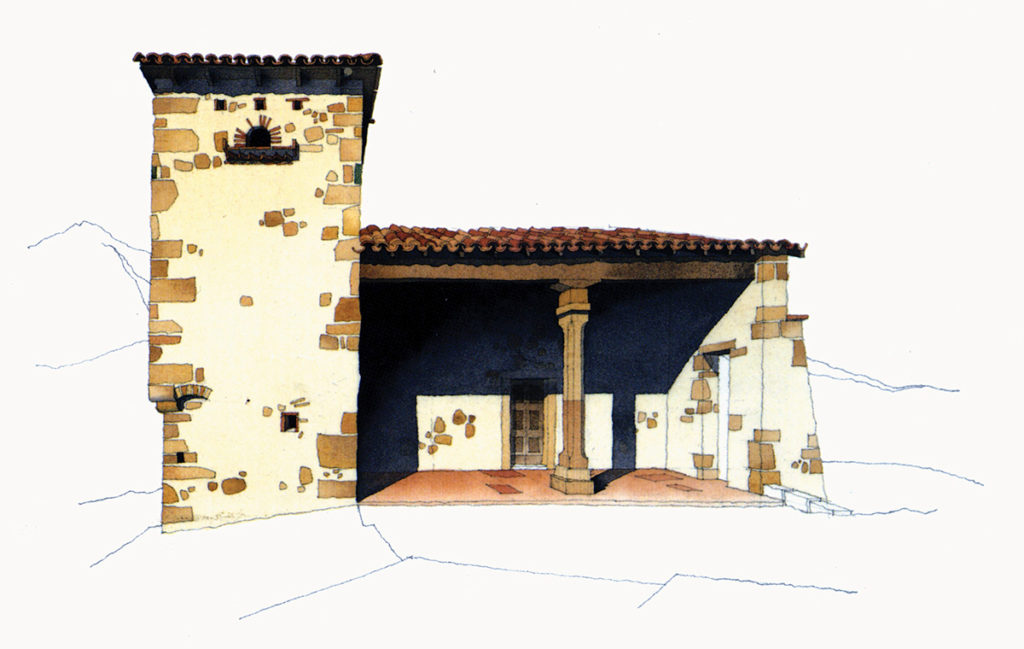 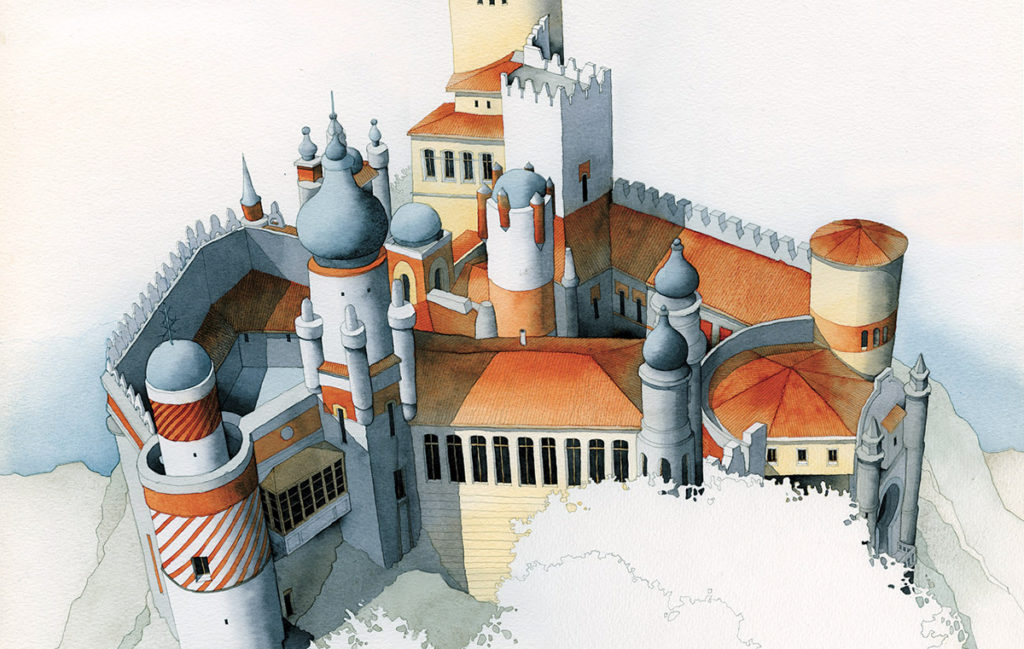 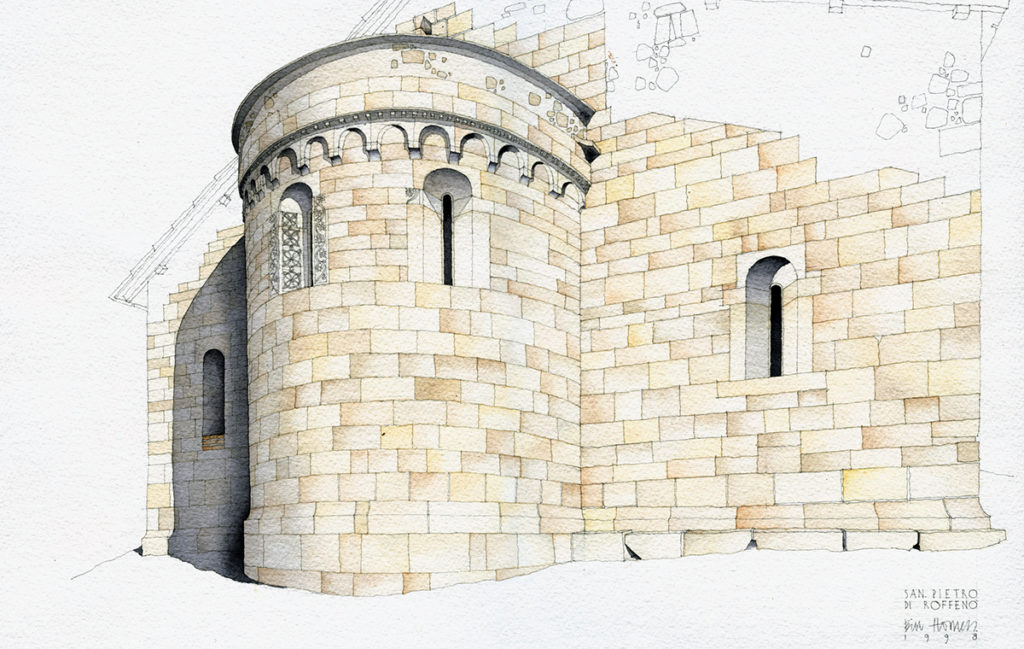 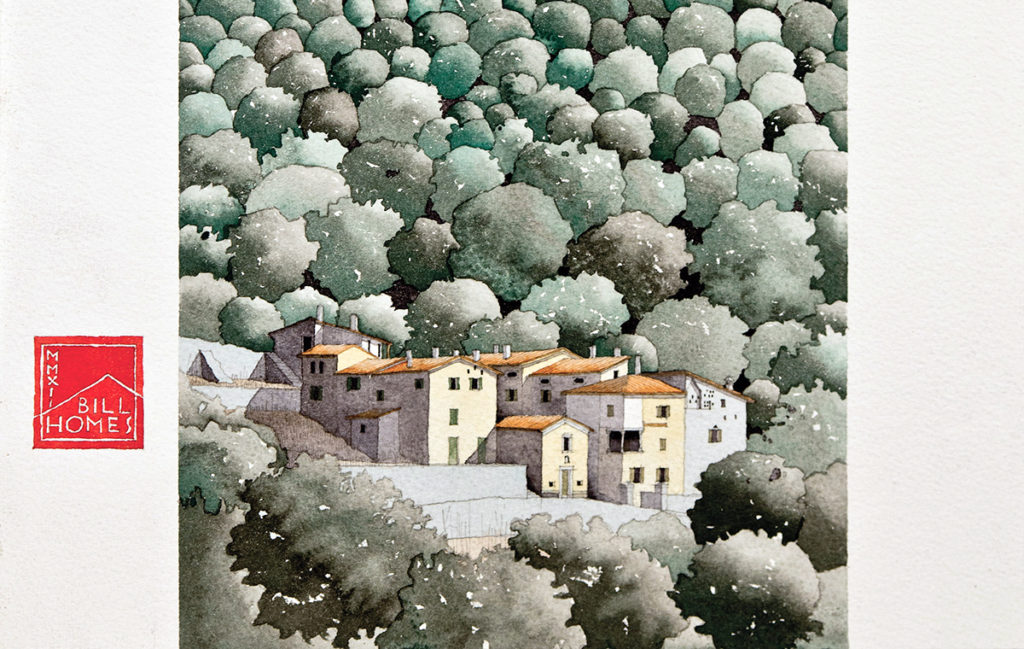 Bill’s point of view and portraying things leaves its indelible mark in those who admire and get to know his work. In fact, the artist has the skill to see what everybody has looked at but not quite seen. In the drawing, a reconstructed archway – an apparently negligible detail – is back to its early role: a door, shut since decades by now and once again opened in this representation, shows its original function, somehow frozen in an ideal time and established in its archetypical form.

Usually, Bill draws in a quasi-photographic style: houses and churches are meticulously reconstructed – even the bricks they’re build of are portrayed. At the same time, the very underlying essence of things surfaces, the deep reason why the builder made them that precise way. Hence, materials take on a vital importance – wood, stone, bricks to wonderful bicolour “zebra” marbles of Romanic Pistoiese churches. 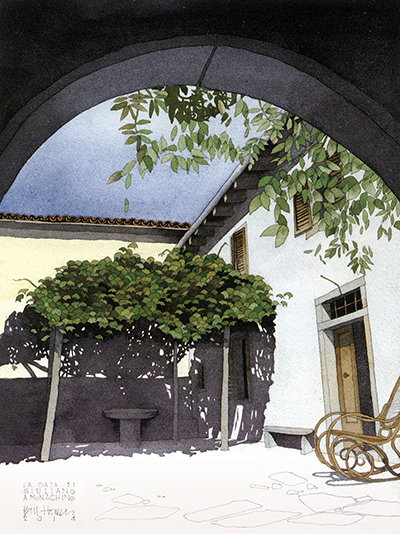 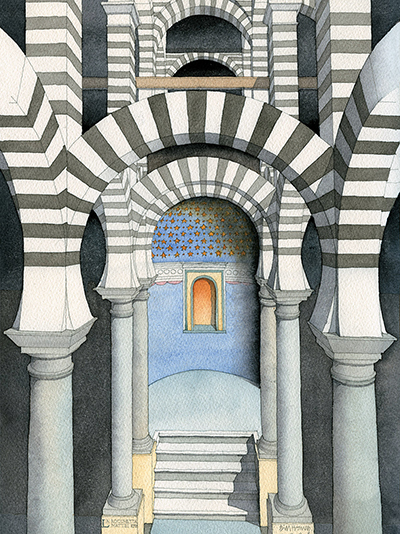 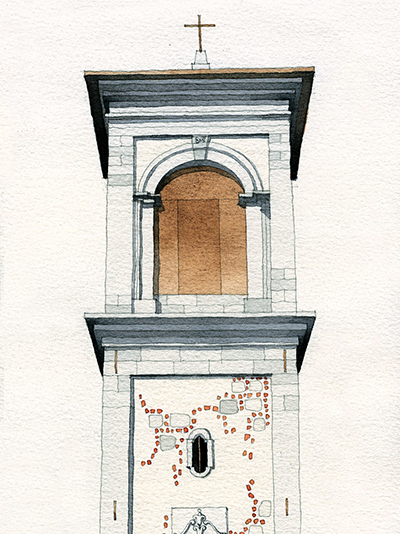 Recently, in his preface to Bill’s exposition, the director of the Accademia di Bologna Mauro Mazzali has thus summarised this specific procedure: in our imaginary, Bill’s favorite themes interweave like something already seen before, yet never observed all the way, and still: we thank him for his sensitivity and his mindful soul which let us understand what we already knew. Exactly what we considered familiar, what we took for granted, if looked at with curious, mindful, even wondering eyes, can reveal a whole array of significance.

In some respects, Bill is above all a technical specialist who attains to tight rules, even in watercolour technique. Yet when it’s fulfilled, his work appears as a piece of art: often the subject is isolated and nearly floats in the space to be observed from a different point of view.

It occurs to me to remark that Bill’s way to look is slow, since he moves forward to point out his subjects lento pede – as Latins would have said. I would add: lento oculo, lenta mente. The slow gait allows to see what had not yet been seen or what many don’t see. In the mountain like in the city, also the smallest stone becomes worth been showed and valued, as witnessed by the numerous volumes published in the recent years. Bill’s books all refer to the territory separating – and joining – Tuscany from the northern face of the Apennine. This place is truly Bill’s souls’, his home for years, where he’s purchased a house and returns among us for some months every year. Not without reason, the municipality of Grizzana Morandi has granted him the honorary citizenship: a Tuscan-Emilian fellow citizen.

Bill’s attitude toward these sones – mountain as urban – is brilliantly expressed in the title he chose for his speech at the convention “Una montagna di pietra e legno”, alias a sentence by architect Louis Isadore Kahn: «I asked the brick what it wanted to be and it said – an arch».