The first report about the Lustrola village and downstream Riolo – disappeared to this day – dates back to 1021. Between the XI and XII centuries two churches were erected there, San Lorenzo in Lustrola and San Leonard in Riolo (now missing), simultaneously with the church of San Nicolò in Granaglione, while the Pieve di Sùccida (the current Pieve of Borgo Capanne, for many centuries a very important religious center in this area) is much older. Back then, the Bolognese administration joined Granaglione and Sùccida, current Borgo Capanne, in a single municipality, to which were later added Boschi and Lustrola. For centuries, the municipal headquarters were in Lustrola, until 1798, as the municipal banners were handed to Granaglione.

On the mountaintop, towards Borgo Capanne, some rocks reveal that a castle once stood there: Castel Martino, owned by Matilde di Canossa. In 1307, the Panico Counts destroyed the fortress, while a legend holds Fredrick Barbarossa’s catapults responsible.

Between the XI and XII centuries, in the high side of Lustrola is built the church of San Lorenzo: its first spurs dates to 1200. After the XIV century it joined the Pieve di Sùccida (Capanne); it gained its autonomy only in modern age. The church of San Lorenzo towers over the village and looks onto a large grassy churchyard, the actual public square with a wide view on the houses, the valley and the Tuscan side of Campeda. The church enumerates several works of art and remnants. The current architectonic plan dates back to the XVII century, when the occurrence of expansions and restructuring altered the original building. Like in many other churches of the area, the bell tower stands separately from the main building. On the inside, on the old stone altar figures and symbols in Como style are carved; the stone baptismal font, crafted by a local stonemason, is very pleasant as well. 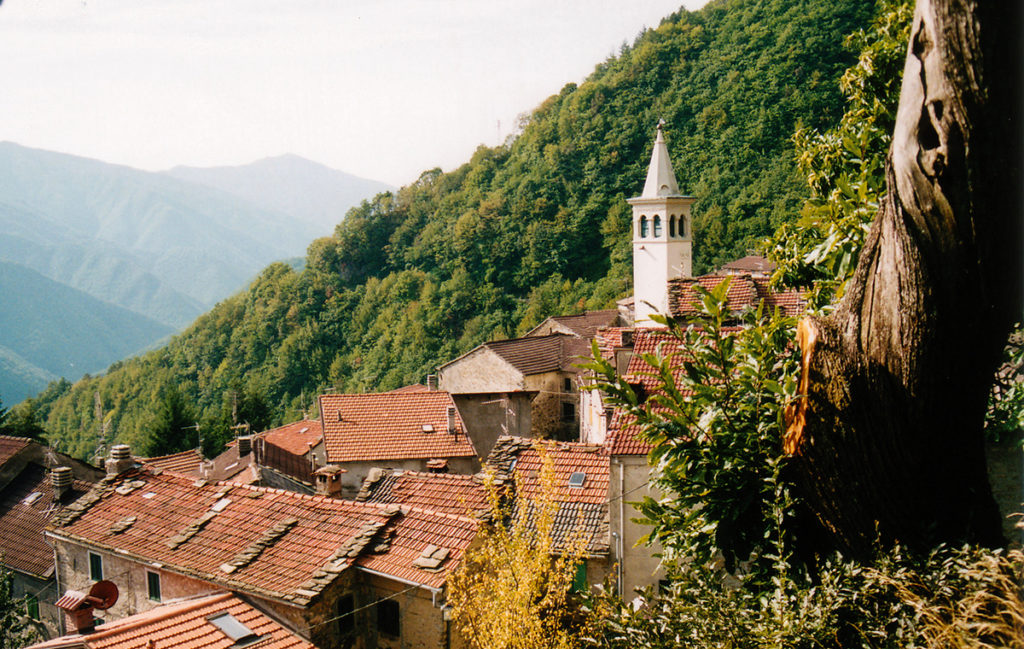 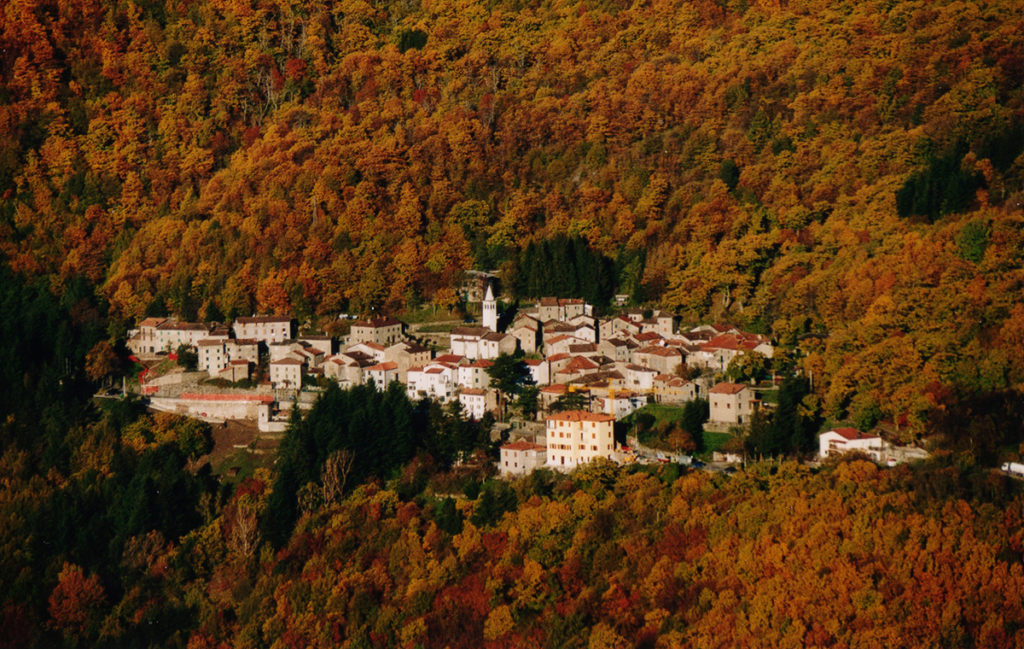 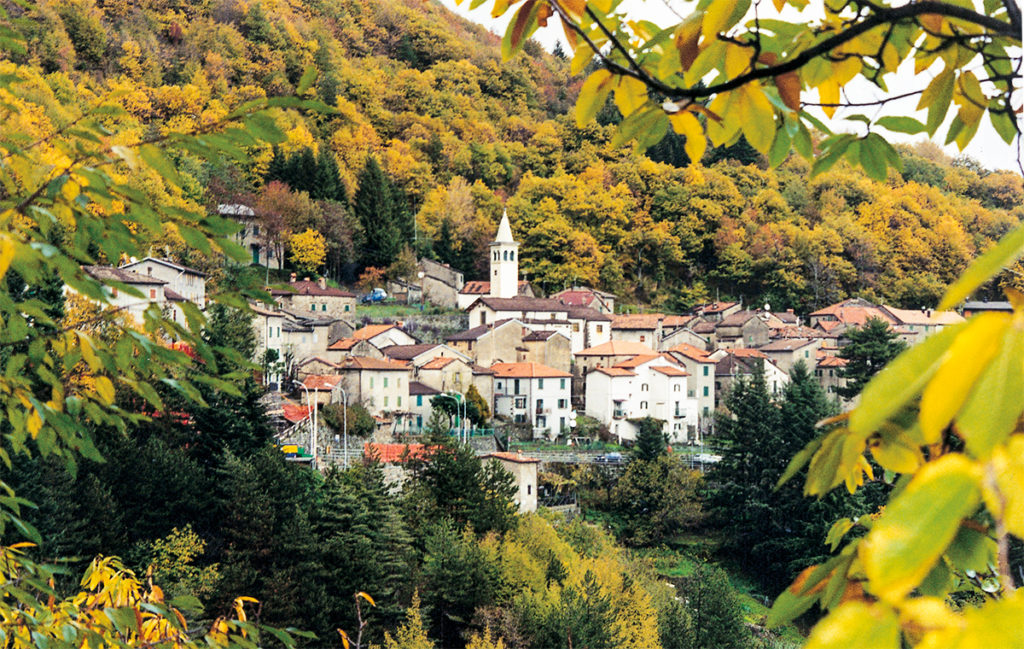 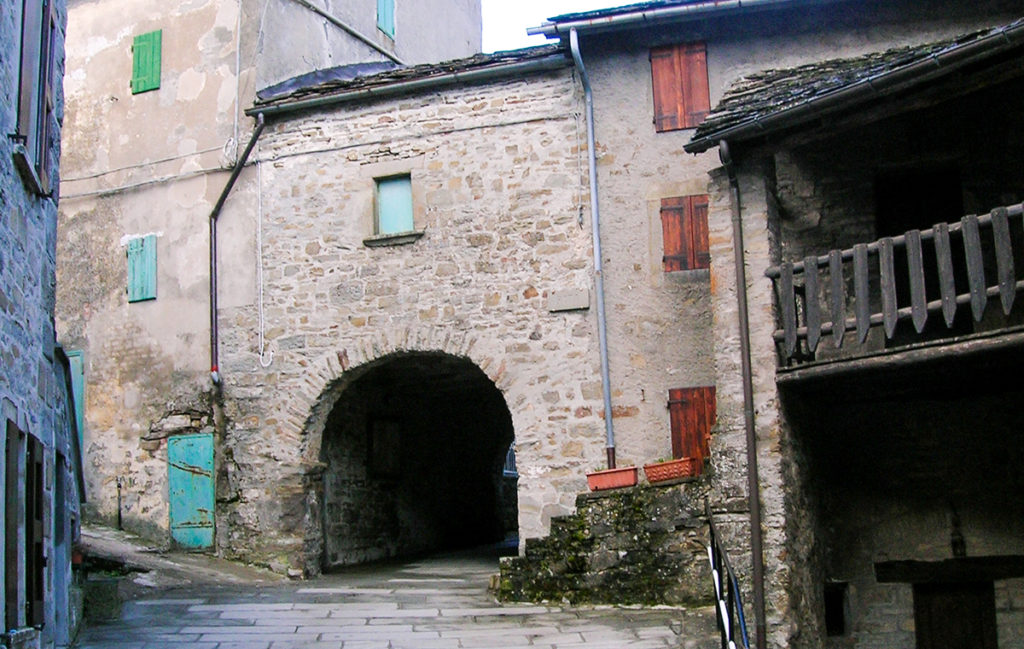 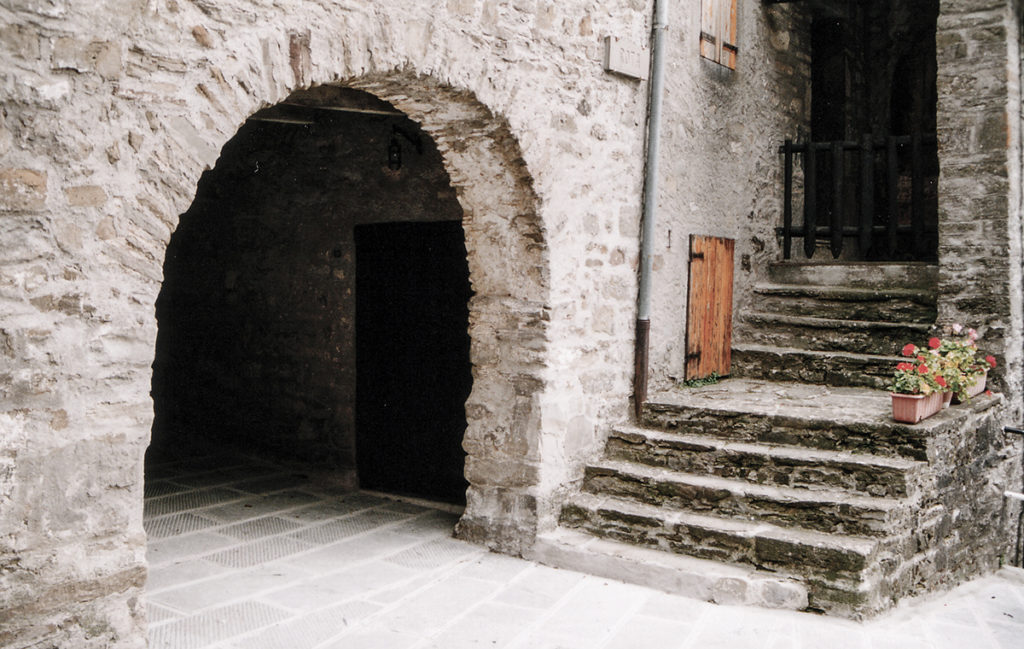 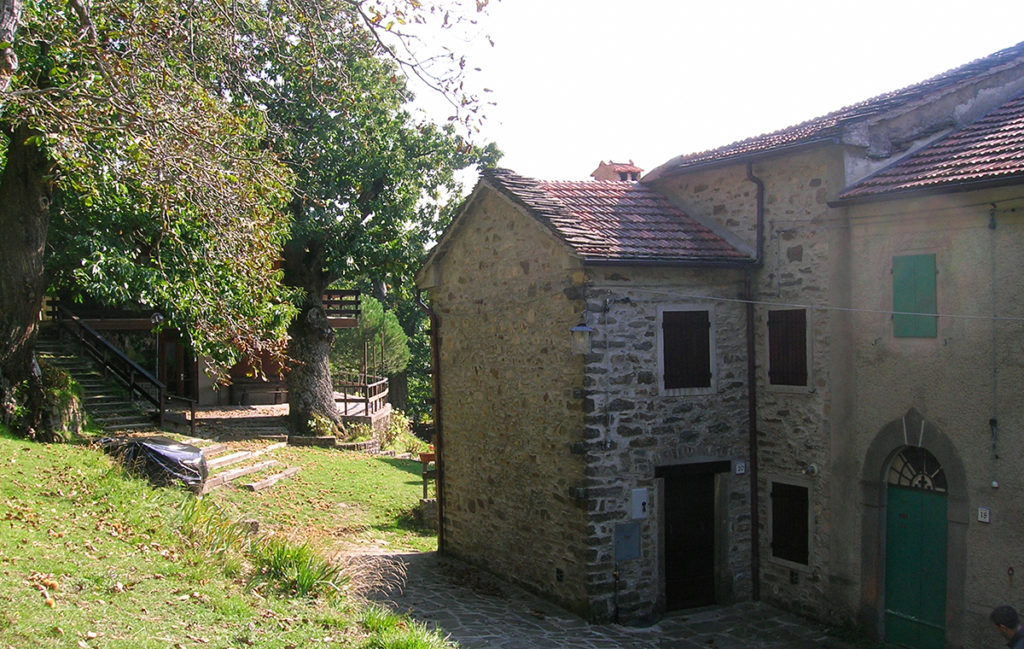 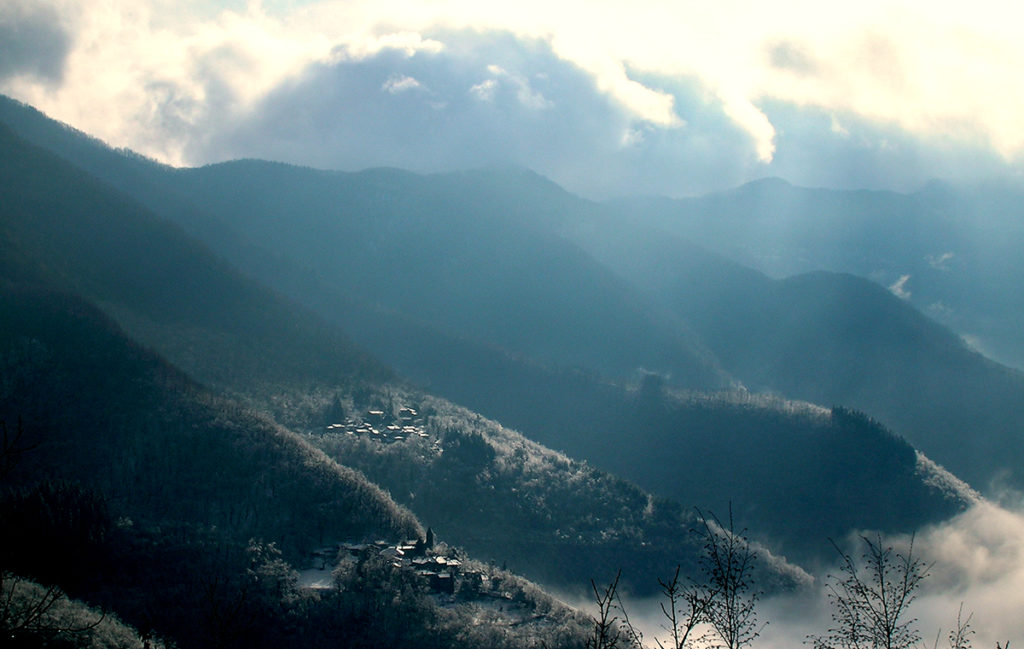 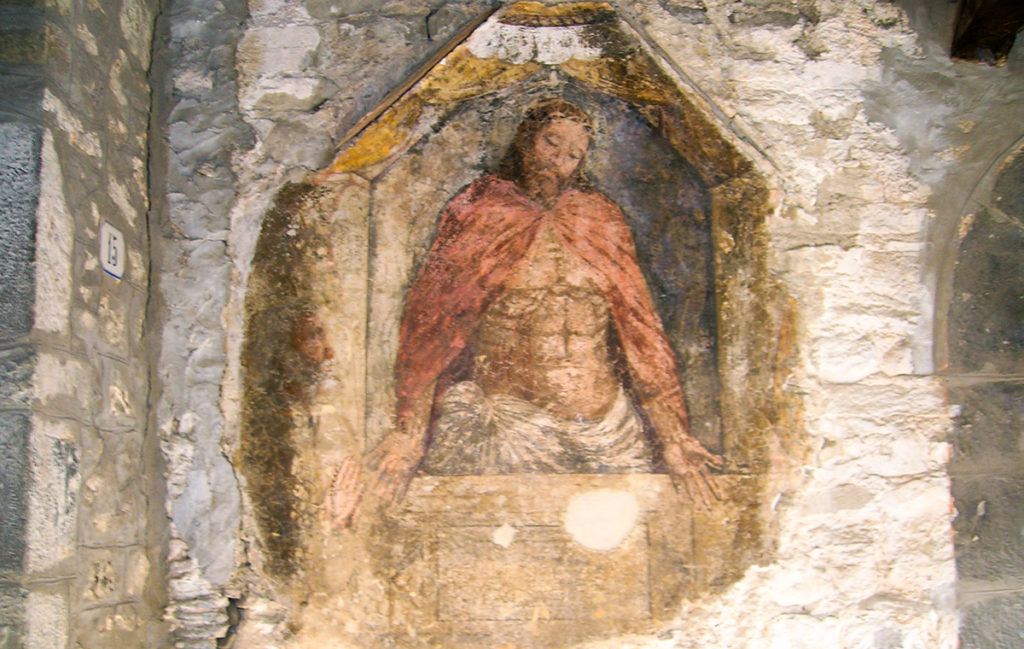 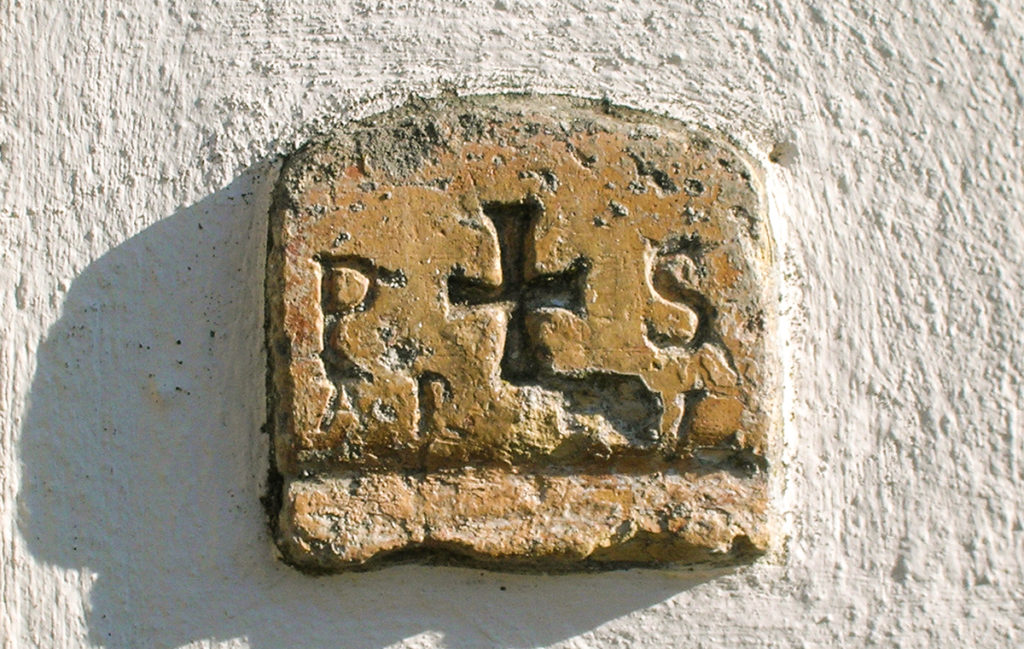 In its trapezoidal-semicircular nucleus, the medieval-old village shows an original “Middle-Age castle”, almost entirely surrounded by streets. On the northern side, the castle is encircled by the would-be main road (via Mezzola) at the subsequent village enlargement; on the southern, eastern and western sides, a web of still existing steep roads and widenings skirts the castle. The central road was the main connection way between the old Granaglione core (actually, the originally several cores of Granaglione) and the Pieve di Sùccida – Capanne and the related hamlet, while the two steep streets descending the town were linking the parallel road halfway downstream, connecting Riolo to Granaglione and Sùccida-La Pieve.

The most relevant buildings in the village center are the tower-house Zanini (dated 1414) with its pontifical keys at the (then) outer outskirt of the built-up area, towards Granagliano, and the later tower-house of Ser Giulio Zanini (dated 1587), as Lustrola underwent a significant demographic and urban boost, starting from 1585, and the village got enclosed by five large vaults. In the former, remarkable details can be noticed, like the lancet door, the typical balcony and the window, on both of which are the Church keys, an inscribed corner stone and a fresco depiction the Ecce Homo and two praying figures. The latter is a typical sample of tower-home, with its vertical development (each floor counts one single room), the loopholes (denoting its original military function) and a remarkable stone crest as a display of pride.

Beside these considerable buildings, the whole village provides glimpses, yards, interesting and beautiful streets. Today only one vault towers in the central street via Mezzola; they were once numerous and their role was complex and multiple: to defend the village, to improve the static resistance of the buildings, to shield from rain and sun, to set yards and squares apart, crucial to the work and daily life flow and to the neighborhood relationship.