On August 4th, 5th and 6th will take place the first edition of PORRETTA PROG, a festival dedicated to a music genre whose fans number millions since the ’70s.

Bands and musicians who made this genre shine in its heyday will star the event. Each evening will be opened by a live performance by artists who express themselves through the cultural and historic tradition of Progressive Rock, keeping it up with the times: the Soft Machine (Aug 4th), the Caravan (Aug 5th) and Jethro Tull’s Martin Barre Band (Aug 6th) 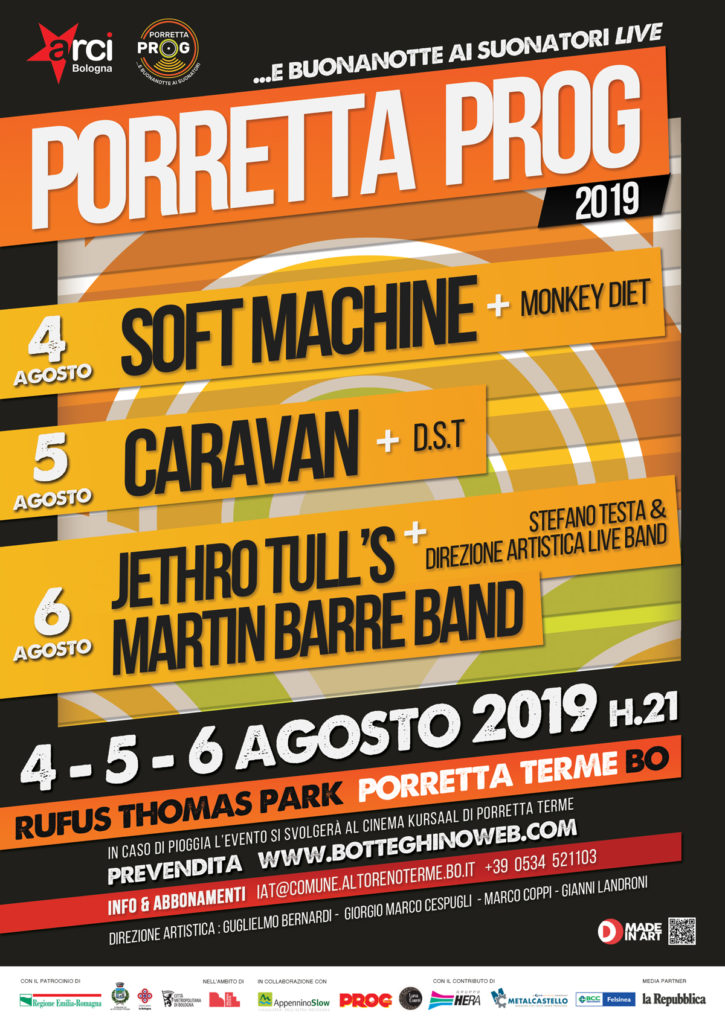 Leading exponents of the so called Canterbury School, forerunners of the jazzrock, the Soft Machine will perform at the Rufus Thomas Park with John Etheridge (guitar), John Marshall (drums) and Roy Babbington (bass), band members in the ‘70s, and Theo Travis (sax) also known for Gong, Robert Fripp and Porcupine Tree.

It’s the 50th anniversary tour from the birth of one of the most representative bands from the Canterbury School and brit prog, a band able to skilfully melt rock, jazz, melody and improv. On stage, Pye Hastings (singer, guitar), Peter Richardson (violin, guitar), James Leverton (bass), Mark Walker (drums), Jan Schellhass (keyboards) and above all a music which crosses decades.

Martin Barre is one of Jethro Tull’s funders and was Jan Anderson’s band guitarist until 2011. Beside many cooperations (Paul McCartney, Phil Collins, Gary Moore, Jo Bonamassa, Chris Thompson), from 2015 he recorded 7 albums with his band. In this show his songs will be performed along with Jethro Tull’s. With Barre, Dan Crisp (singer), Alan Thomson (bass) and Darby Todd (drums).