The Porretta Soul Festival turns into Porretta Soul Movies. The live event was rescheduled next year (22-25 July 2021), but the spirit of the Soul remains intact thanks to the large-screen images dedicated to the genre that made Porretta Terme – the Apennine location between Bologna and Pistoia – famous Worldwide. On the days when the concerts were scheduled, Friday 24, Saturday 25 and Sunday 26 July 2020, the artistic director Graziano Uliani, set up three evenings of screenings: “A Soul Journey”, “The roads of the soul”, “All Day and All Night” and “James Brown: Soul Survivor”.

“We have been solicited by many requests for fans – Uliani explains – who do not want to give up the Porretta appointment. We therefore thought of the screening of some movies with the subject Soul/Rhythm & Blues, partly unpublished, to be presented with the intervention of some authoritative testimonials.”

The screening of “A Soul Journey” on 24 July will be held in the garden of the Hotel Helvetia while the projections of 25 and 26 will be held at Rufus Thomas Park, the traditional arena where the festival is held.

The screening at Helvetia includes dinner with reservation +39 0534 22214. For the two evenings at Rufus Thomas Park, free admission, but reservations required according to the regulations in force at the Tourist Office of Porretta +39 0534 521103. 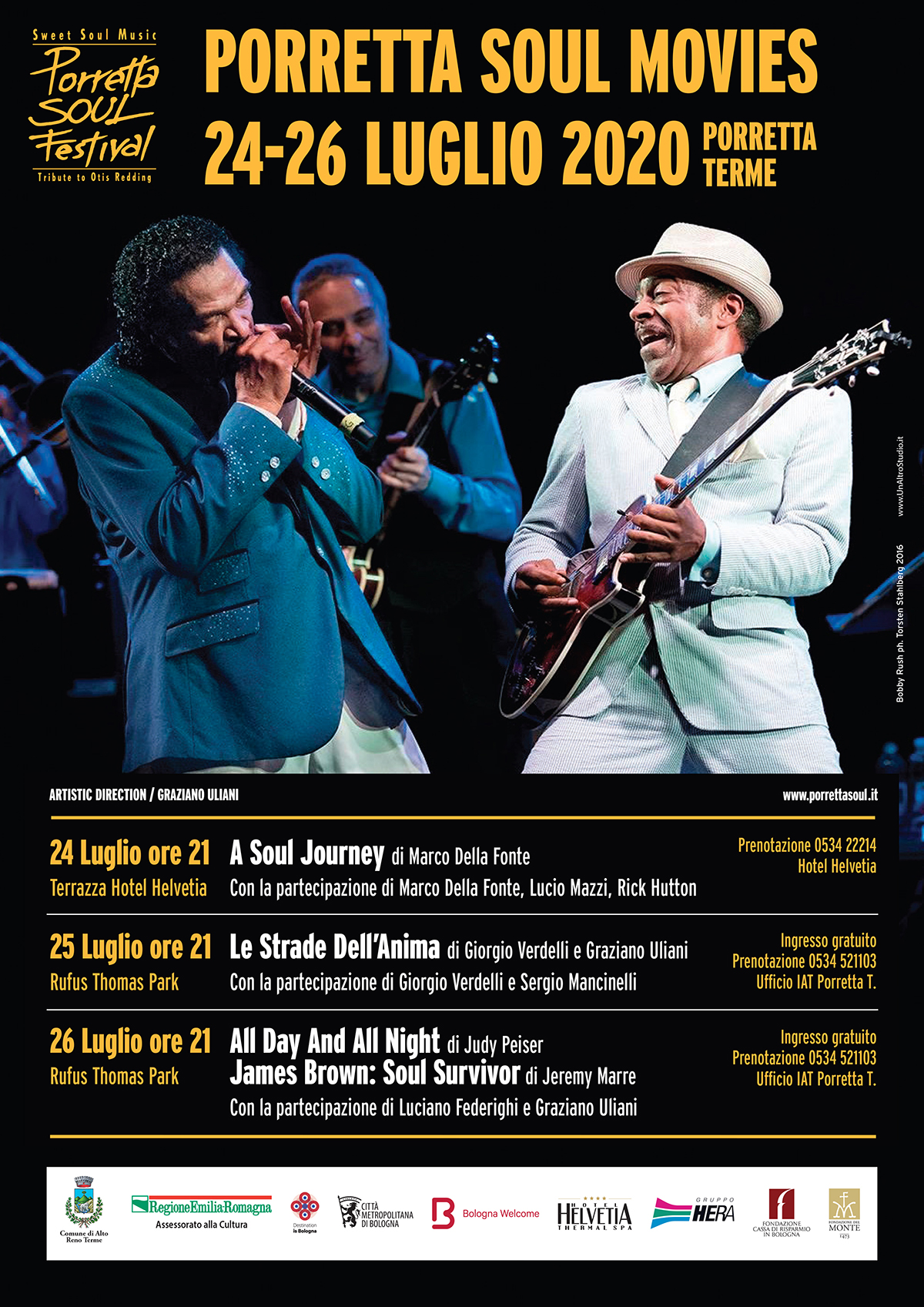 “A Soul Journey” is a movie telling about some aspects of life, often complicated by these artists and in particular, their artistic, human and emotional paths that lead them to perform in a small “lost” town in the Italian Apennines. Paradoxes of Italy. Porretta, known since ancient times for the thermal waters on the Apennines between Bologna and Florence, gets  a “second life” by attracting fans of rhythm & blues from all corners of Europe. In the film we will find Otis Clay – James Carr – Solomon Burke – Rufus Thomas- Bar Kays – William Bell – David Hudson – Syl Johnson – Spencer and Percy Wiggins – Harvey Scales – RobinMcKelle – Chick Rodgers – John Gary Williams – Sugar Pie DeSanto – Toni Green – Swamp Dogg – Bobby Rush – Bernard “Pretty” Purdie – Chilly Bill Rankin – Aaron Neville.

Lucio Mazzi has been dealing with Popular Music as a scholar and enthusiast since the late ’70s. Professional journalist, he has published thousands of articles, about forty books (as author or coauthor), he has written and conducted radio and television broadcasts for Italian (Rai, TMC, Sky Arte) and foreign (London One Radio) national broadcasters. He taught history and technical and musical characteristics of Popular Music at the Conservatories of Ferrara and Bologna. His latest book (February 2020) is titled Young Music and is a synthetic history of blues, rock, jazz, black music, dance song and Italian rock of the last 100 years.

Featuring Solomon Burke, Zucchero, Isaac Hayes, The Memphis Horns, Percy Sledge, Steve Cropper, Michael McDonald. “Soul’ Roads” is a journey into the roots of American popular music, to the places where rock, blues and soul have become part of the soundtrack of the 20th century. A cross-section of America to understand an important piece of its culture, in the year that was solemnly declared by the American Congress “Year of the Blues”.

The documentary was chosen from the programs that inaugurated the Rai Doc schedule for DTT in the full duration of 110 ‘divided into two parts. An extract of 10 ‘was awarded 2nd place at the “Chatwin 2003 Prize” chaired by Carlo Lizzani, in the section reserved for professional documentary filmmakers. The 1st part takes place in Memphis, on the occasion of the show “Soul Comes Home”, for the opening of the StaxMuseum Of American Soul Music and tells the legacy left by the legendary Stax Records, that of Otis Redding, Rufus Thomas, Sam & Dave and Isaac Hayes, at the Sun Studios where Elvis Presley, BB recorded King, Jerry Lee Lewis, Johnny Cash, etc. to the Lorraine Motel where Martin Luther King was assassinated in 1968. Exceptional testimonial of the Zucchero trip, sincere “fan” of this music from which he drew great inspiration.

Part 2 begins in Atlanta, the capital of Georgia and Macon (the city where Otis Redding, Little Richard, Lena Horne, James Brown, Allman Brothers Band) grew up along what is called The Bible Belt. from the south more traditionalists, up to Alabama, where the memory of the Ku Klux Klan is still alive. The journey continues in Mississippi, the state of the Blues par excellence, until it ends in Tupelo, the birthplace of Elvis Presley.

A journey that has as a constant reference the Porretta Soul Festival with historical images of the performances of the great soul of Porretta.

Giorgio Verdelli is a director and television author. He reported a great success with “Unici”, the monographs dedicated to the great artists (Guccini, Pavarotti, Bocelli, Dalla, Ramazzotti, Mina, Vasco Rossi, Bolle) on RAI2 from 2015 to 2019

Sergio Mancinelli is a journalist, TV presenter, radio presenter as well as Italian voice actor. He is best known for conducting the 1986 Sanremo Festival with Loretta Goggi.
He also conducted numerous musical television programs for Rai such as Discoring, Concertone and the variety Fate your game together with Fabio Fazio. He currently leads “Dodici79” on Radio Capital in which he tells us about all the records released by December 31, 1979.

All Day and All Night is a film that through the tales of some legendary musicians such as B.B. King, Rufus Thomas, Evelyn Young, Fred Ford from a personal look on Beale Street, the street of music where the lights never went out.

Soul Survivor is a detailed portrait of James Brown, who through interviews with the same “Godfather of Soul” and absolute master of funk, with his collaborators and musicians influenced by him, and films, images and vintage recordings, retraces a prodigious career and constantly inventive, marked also by clashes with the law and tragic episodes, and brings out a unique personality, as dynamic and exuberant as it is contradictory. The author, the Londoner Jeremy Marre, who passed away last winter, was one of the most acute and prolific musical documentaries between the twentieth century and the year 2000: many of his works are dedicated to the giants of jazz, blues and soul, from Count Bases to Otis Redding, from Big Bill Broonzy to Marvin Gaye.

Luciano Federighi, from Viareggio, is a music critic (mainly on the pages of Musica Jazz magazine), essayist, writer, draftsman, singer, author, musician, considered among the leading experts of blues and rhythm & blues in Italy. His latest book, the Istrioni e sirene trilogy (2019), describes hundreds of great American voices from Al Jolson to Bobby McFerrin, from Bessie Smith to Aretha Franklin; and his most recent CD, Viareggio & Other Imaginary Places, sees him duet on an original jazz-blues repertoire with the saxophonist Davide Dal Pozzolo, repeatedly present on the Porretta stage.