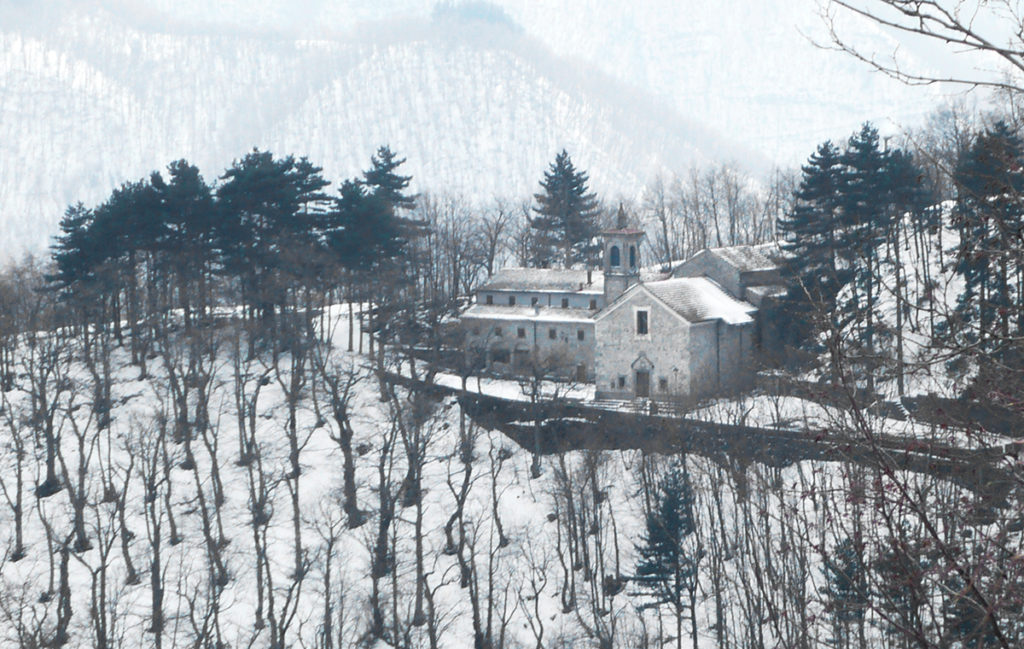 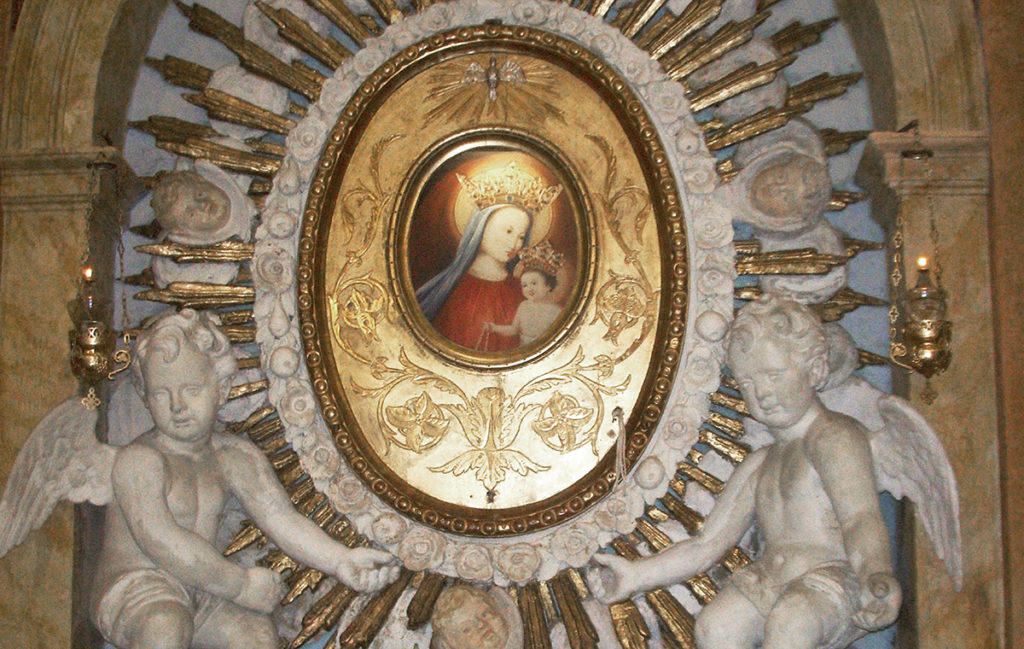 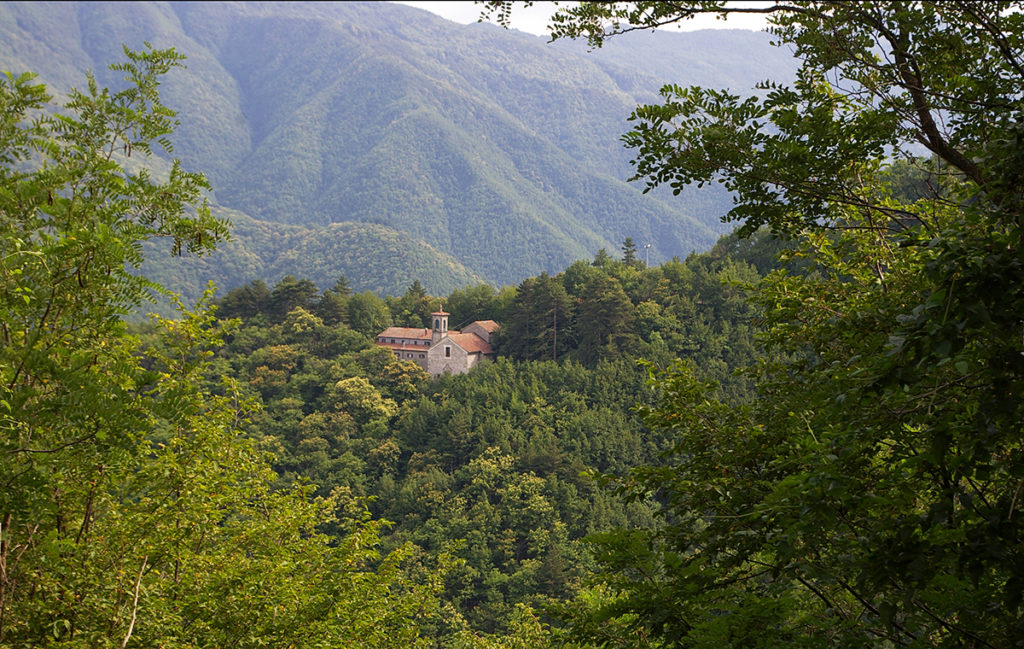 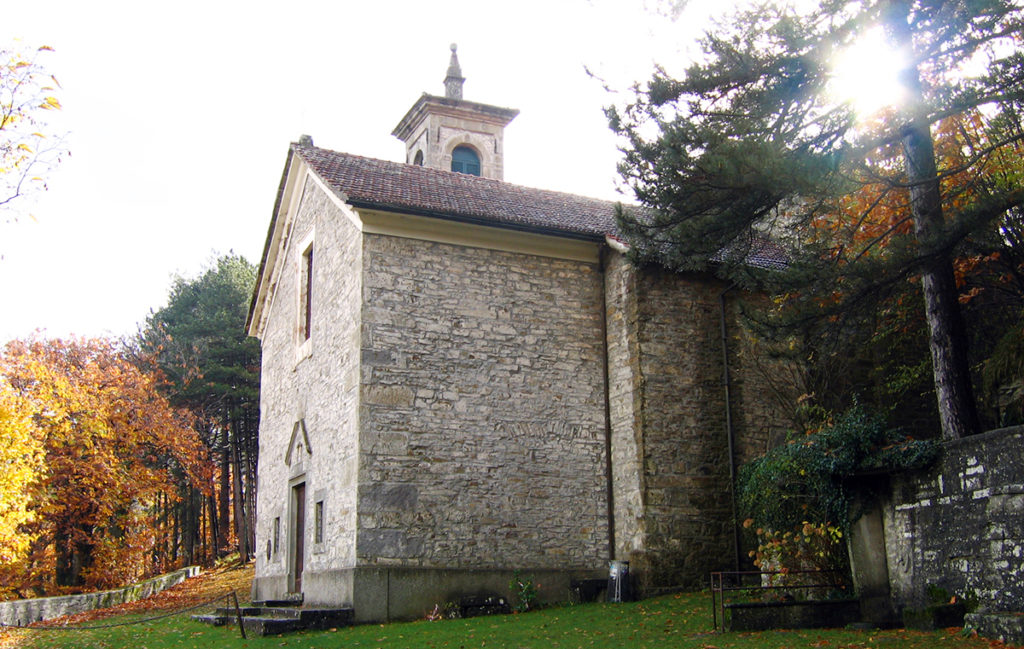 One day, sometime between 1521 and 1550, Don Simone priest of Granaglione, on the road leading from Granaglione to Boschi, was caught by a storm and found shelter under a stone of a rocky mountain. When the rain ceased, as he walked away, the stone broke down and collapsed. Grateful to the Madonna, he painted on that stone a picture of the Virgin Mary with the Child in her arms.

The devotion to that image grew over time so much that in the year 1630 the inhabitants of Granaglione, struck by the plague, walked on pilgrimage praying to be saved. A tiny oratory dedicated to the Madonna della Neve was built as an ex-voto, in which the stone containing the painting served as the corner-stone of the building and the image as the altarpiece.

In 1634 Calvigi was known as a miraculous healing place and began to attract pilgrims from the surrounding villages and mountains.

In 1635 the old oratory was demolished and a larger one was constructed in scale of the current central nave of the church.

In 1781 new expansion works were carried out: the wooden trusses were removed in the ceiling which was modified by raising it four meters higher.

The church had three altars, the main one overlaid by an image depicting the Coronation of Madonna with Saints Nicola from Tolentino and Augustine. At the center of the painting there was an opening allowing to see the Virgin with the Child painted on the stone.

In 1825 the bell tower was added, in 1836 the altars were painted in the sanctuary by Camillo Veronesi from Bologna.

In 1900 the sanctuary underwent the last renovation: the apse was designed so that the image of the Madonna could be kept inside the sanctuary. The ancient picture painted on the stone, liable of consumption and several restorations, was detached from the stone in 1862 in order to ensure a better preservation. In 1920 it was transferred on a fresco on canvas by the painter Agostino Mazzanti. In August 1936 Cardinal Nasalli Rocca celebrated  the coronation of the new image. In 1954 the image on canvas was replaced by a ceramic double from Faenza.

Today, a new copy of the image on canvas is visible in the sanctuary preserving the typical elements of the original “Madonna di Don Simone” painted on the stone: the Virgin holds the Child holding a Rosary crown in his right hand.

The celebration of the Sanctuary is the Assumption of the Blessed Virgin Mary on August 15th.