History, cinema, nature, sport and enogastronomic hiking from the Arco del Meloncello to the Apennine mountains.

A tight program to discover this extraordinary territory through free guided tours, cycling tours and hikes. Five special appointments will focus on the bond of Alto Reno Terme with cinema and sport, on the verge of the APPENNINICA MTB STAGE RACE in Bologna, one of the largest Italian summer sport events.

The Reno valley is primarily known for its beautiful nature, its historic-artistic heritage and its food and wine wealth, but also for its local traditions and its cinema culture. 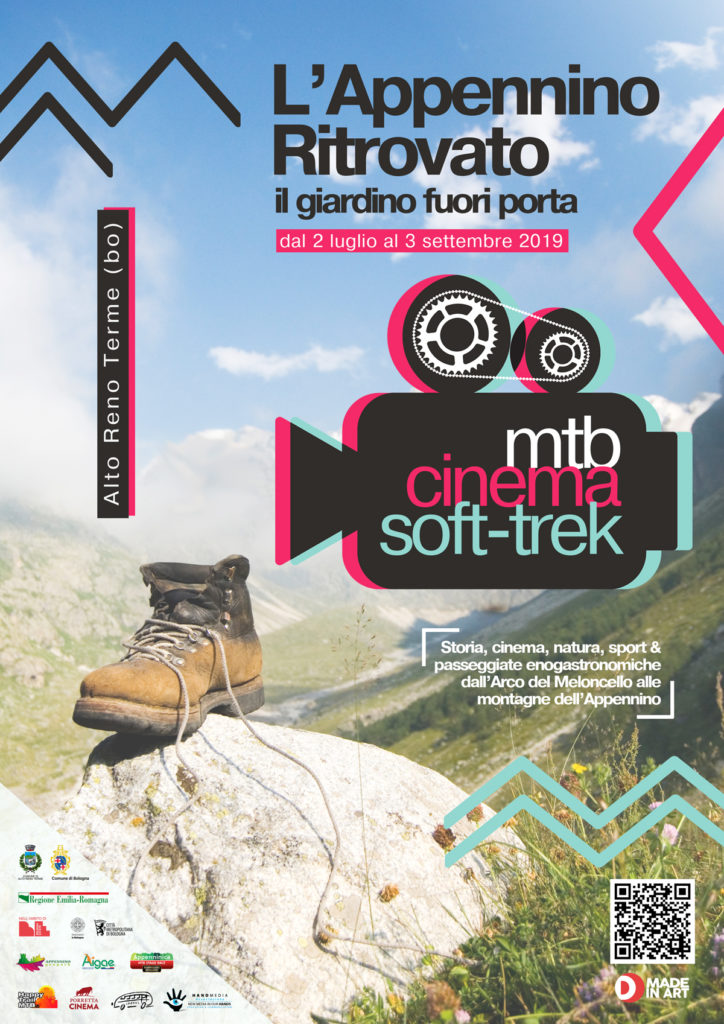 A host of evening film screenings and meetings with cinema professionals will underpin the bond of Porretta Terme with cinema from the 60s to present days Porretta Film Festival.

Guided tours, cycling tours and hikes will round out this unique experience. Destination: the settings where Bolognese maestro Pupi Avati has staged parts of his movies. An exclusive journey through territory, nature and cinema.

The APPENNINICA MTB STAGE RACE 2019 special event is the link between city and mountain, as the former looks towards the latter: a special occasion to stand by the Mountain Bike race starting in Bologna and touring the whole Apennine.

A full program in July and August and an Environment Hike Guide will lead Alto Reno Terme tourists at the discover of the Tuscan-Emilian Apennines treasures: nature, plants, animals, history, traditions and culture of this land.

Every Tuesday in July and August, a hike with a different focus: history, the thermal springs, the historic town center, the Reno river, mount Monte della Croce, the Marconian itinerary, churches and sanctuaries.

Tuesdays hikes start from Piazzale Protche (before the railway station) in Porretta Terme at 4:30pm

Hikes are free and suitable for everybody

July 2nd
Porretta Terme and its history
A visit in the Porretta Terme town center and its history, the narrow streets, the squares, the thermal baths, the church of Santa Maria Maddalena, the Madonna del Ponte sanctuary and a walk to Monte della Croce’s beautiful lookout.

July 13th
Riola, La Scola, Montovolo
Art, culture and history join in this itinerary at the discovery of architecture treasure in Alto Reno: the church of Riola by architect Alvar Aalto, the Moresque style Rocchetta Mattei castle, La Scola hamlet a tiny and unspoiled medieval gem the famous Montovolo sanctuary with its lookout on the Reno valley.

July 23rd
Devotion in the Apennine
Devotion history and culture of a land through its churches: the Santa Maria Maddalena church, the Madonna del Ponte shrine and the church of the Capuchin friars.

July 27th
Labante’s caves
An itinerary to discover the breathtaking natural caves of Labante, with their petrified springs and falls: a very important geologic site. Nature, geology and history of one of the most charming places of the Bolognese Apennine.

July 30th
Porretta Terme and its history
A visit in the Porretta Terme town center and its history, the narrow streets, the squares, the thermal baths, the church of Santa Maria Maddalena, the Madonna del Ponte shrine and a walk to Monte della Croce’s beautiful lookout.

August 6th
The Bagni della Porretta, the history and the thermal baths
The history of Porretta is marked by its thermal water, whose healing charateristics were famous already in Roman times: a story unfolding along the narrow streets of the town center and the rivers that cross it.

August 17th
Riola, La Scola, Castel di Casio
First a visit to the peculiar church of Riola by Finnish architect Alvar Aalto, then to the pittoresque Rocchetta Mattei castle, followed by La Scola hamlet a tiny and unspoiled medieval gem to conclude with the town of Castel di Casio for its traditional medieval fair, with its craft workshops, inns and taverns, feasts, music and shows.

August 24th
Stagno, Bargi and the Suviana lake
In the heart of the Suviana e Brasimone lakes regional park, starting from Poranceto, among ancient chestnut trees, at the discover of old hamlets of Stagno and Bargi. Then a relaxing break on the banks of the Suviana lake by a beautiful landscape.

August 27th
Devotion in the Apennine
Devotion history and culture of a land through its churches: the Santa Maria Maddalena church, the Madonna del Ponte shrine and the church of the Capuchin friars.

August 31st
Dardagna Waterfalls
In the heart of the Corno alle Scale natural park at the discover of this land. Visit to the old Madonna dell’Acero sanctuary, a major expression of past local folk devotion. Then a walk in nature along the Dardagna river, to admire its beautiful falls and waterworks.

September 3rd
In the footsteps of Guglielmo Marconi: Porretta – Le Croci and back
Surrounded by nature, an easy path leads to forgotten places and historic hamlets, in the birthplace of the Marconi family where the famous scientist and inventor spent his youth summers.

In case of bad weather, hikes will be postoponed.
The program might vary on guide’s discretion if required by participants safety and needs.